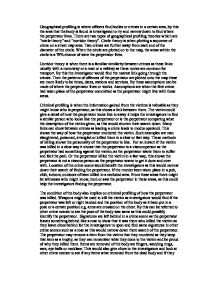 Geographical profiling is where officers find bodies or crimes in a certain area, by this the area that the body is found is investigated to try and narrow down to find where the perpetrator lives. There are two types of geographical profiling theories which are “circle theory” and “corridor theory”. Circle theory is when plotting a sequence of crime on a street map area. Two crimes are further away from each end of the diameter of the circle. When the circle are plotted on to the map, the areas within the circle is a 78% chance of were the perpetrator lives.

Corridor theory is when there is a familiar similarity between crimes as these links usually with a motorway or a road or a railway as these routes are common for transport. By this the investigator would find the nearest link going through the crimes. Then the patterns of offences of the perpetrator are plotted onto the map these are more likely to be times, dates, stations and services. By these assumptions can be made of where the perpetrator lives or works. Assumptions are when the first crime had taken place of the perpetrator committed as the perpetrator might live with these areas.

There is a similarity between all four victims as they all were female as they were not in their teenage years but in their adult ages. The location areas of each victim was murdered are different areas of the city but victim 1 and 2 were in the same city of Preston. This also applies to victim 3 and 4 as they were murdered in the same city but different areas of the city of Ashton.  All four bodies were discovered on the same month but on different dates of the month on January, as these bodies were found during the morning hours and last seen in the late night hours between 10-12 pm. The cause of death was very similar to each victim as they were all strangled but for victim 2 she was beaten as well. Weapons were found at the crime scene or victim 1,3,4 as the weapon used were “tights” in this case this weapon was used to strangle the victim to death , however victim 4 had a bruise on her head which suggest a heavy object was thrown on her head. There was no evidence found of weapon at the crime scene of victim 2 as bare hand was used to straggle and beat her to death. The location of the dead bodies was very similar to victim 1, 2 and 3 as they were found in bushes as victim 2 and 3 were found in the park and victim 1 was found in the car park. Victim 4 was found at the railway tracks. All four victims were murdered in isolated areas at night as not often people go to these areas at midnight. Victim 2 bodies was covered in a plastic as in away the body was hidden as nobody can see it, as compared to victim 1, 3, 4 their bodies were visible to be seen. There was no item on victim 2 which suggest there was nothing valuable taken off from her as this was compared to victim 1, 3 and 4 these victims had items on them selves which was very valuable to them as they have been removed from them. The items that have been removed from each victim are different to each other but value a lot to them as the perpetrator have removed these to keep as a trophy.  The position of the body of victim 1, 3 and 4 has been lied out in the same way as they arm have been crossed over which suggests these victim might link together with the same perpetrator. All victims had evidence of struggle but the evidence found were at different places of the body.