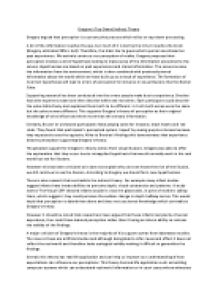 ﻿Gregory?s Top-Down/Indirect Theory Gregory argued that perception is a constructive process which relies on top-down processing. A lot of the information reaches the eye, but much of it is lost by the time it reaches the brain (Gregory estimates 90% is lost). Therefore, the brain has to guess what a person sees based on past experiences. We actively construct our perception of reality. Gregory proposed that perception involves a lot of hypothesis testing to make sense of the information presented to the senses. Hypothesises are based on past experiences and stored information. The senses receive the information from the environment, which is then combined with previously stored information about the world which we have built up as a result of experience. The formation of incorrect hypotheses will lead to errors of perception for instance in visual illusions like the Necker Cube. ...read more.

However this has been criticised as it does not explain why once we know the trick of the illusion, we still continue to see the illusion. According to Gregory we should form new hypothesises. There is also research that contradicts the indirect theory. For example many infant studies suggest infants have innate abilities to perceive depth, visual constancies and patterns. A study names ?The Visual Cliff? showed infants wouldn?t cross the glass table, in spite of mothers calling them, which suggests they could perceive the sudden change in depth halfway across. This would imply that perception is data-driven alone and does not use stored knowledge which contradicts Gregory?s theory. However it should be noted that researchers have argued that these infants had plenty of sensor experience, thus could have learned perception rather than it being an inborn ability so reduces the validity of the findings. ...read more.

However, Gregory doesn?t focus much on the nature of perception. Some parts of perception must come naturally to us. For instance in the visual cliff experiment, infants showed they wouldn?t cross the table due to the depth perception although they were young and wouldn?t have vast knowledge on depth due to them being very young. Lastly, the theory is reductionistic as it overemphasises the importance if expectations as most people see the world accurately most of the time. Also the theory cannot explain why we see illusions even when we know our eyes are being deceived. There is evidently a more complex system occurring which Gregory?s theory is unable to explain. In conclusion, Gregory theory highlights how we perceive things due to expectations and previous knowledge. But the theory doesn?t account for everything and fails to explain certain things such as optical illusions and thus there must be other factors that account for perception. ...read more.