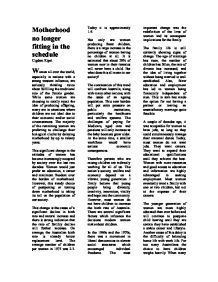 Motherhood no longer fitting in the schedule

Motherhood no longer fitting in the schedule Cigdem Kipel Women all over the world, especially in nations with a strong western influence, are seriously thinking twice about fulfilling the traditional role of the female gender. While some women are choosing to totally reject the idea of producing offspring, many are in situations where children are not ideal due to their economic and/or social circumstances. The majority of the remaining women are preferring to challenge their biological clocks by delaying motherhood by up to twenty years. This significant change in the attitudes of women has become increasingly accepted by society over the last two decades. Women would just prefer an education, a career and maximum freedom over the burden of motherhood. However, this trendy choice of postponing or turning down motherhood is taking its toll on the population of our society. This change is the cause of a significant decline in birth rate and natural increase and there is strong indication that the rate of fertility decline will further increase. On average, the Australian birth rate is already below replacement level. The average number of children per woman in 1975 was 2.3. ...read more.

Today, most women do not want jobs. They want careers. They want to expand their educational qualifications until they achieve the best. Women with more resources and good access to education and information are highly advantaged in seeking employment. Most women eventually want a family with one or two children, but not at the expense of their careers. The younger generation of women are more highly educated than ever before and will continue to postpone child bearing until they are certain they have established a stable career and lifestyle. Another cause of this delay is the difficulty of balancing home life with work life. For too many Australians the choice to have children weighs heavily. When many people check their savings account, it is quite rational for them to delay or decide against having children. Unfortunately, increasing numbers of women put off having children and wait for a better time that simply never comes. The average age at which Australian women have their first child is now 29. This is because women come closest to equality with men when they do not have family responsibilities. As more and more women postpone having children, pursue education and improve their employment prospects, those who have their children young, and who have a lower socioeconomic background, tend to fall behind both socially and economically. ...read more.

Most women still want children in marriage, but with divorce rates so high and children being put off until later in life, relationships often end before the kids come along. No matter how happily married, statistically speaking, a woman still faces a greater than 40% chance of ending up a single parent. Many women who would like to have children may possibly not have yet found a suitable partner, further delaying childbirth. Now Australia must face the issue of increasing the birth rate once again. Demographers now realise that the accelerating trend in fertility decline is not a temporary phase but an indication of a long-term change. Most Australian women do want children but find it too difficult to balance family life and work. Conservatives will ask women to give up work to satisfy their notion of what is an ideal life. In my opinion, Australia's birth rate is not about telling women to go back in to the kitchen. Promoting a better balance between work and family life, with some flexibility for all employees can be achieved without compromising productivity. The population debate in Australia must start by focusing on the family. A good family policy, particularly a better balance between the demands of work and child bearing responsibilities, will ultimately provide the start of a better future. By Cigdem Kipel ...read more.