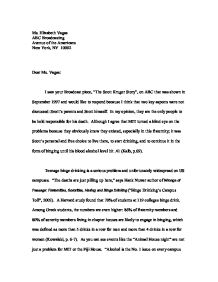 Ms. Elizabeth Vagas ABC Broadcasting Avenue of the Americans New York, NY 10002 Dear Ms. Vagas: I saw your Broadcast piece, "The Scott Kruger Story", on ABC that was shown in September 1997 and would like to respond because I think that two key aspects were not discussed: Scott's parents and Scott himself. In my opinion, they are the only people to be held responsible for his death. Although I agree that MIT turned a blind eye on the problems because they obviously knew they existed, especially in this fraternity; it was Scott's personal and free choice to live there, to start drinking, and to continue it in the form of binging until his blood alcohol level hit .41 (Kalb, p.69). Teenage binge drinking is a serious problem and unfortunately widespread on US campuses. "The deaths are just pilling up here," says Hank Nuwer author of Wrongs of Passage: Fraternities, Sororities, Hazing and Binge Drinking ("Binge Drinking's Campus Toll", 2002). A Harvard study found that 70% of students at 119 colleges binge drink. Among Greek students, the numbers are even higher: 86% of fraternity members and 80% of sorority members living in chapter houses are likely to engage in binging, which was defined as more than 5 drinks in a row for men and more than 4 drinks in a row for women (Kowalski, p. ...read more.

He continues the experiment and sees the group grow nearly by itself. Other kids want to join, to feel the same bond. It becomes a need for them to be with the group and do everything for the group, no matter what their personal opinion is. Shortly before the teacher finally puts an end to the Wave they even started hurting others who didn't conform. This experiment gave the students their answer as well as an idea about how people would follow an authority person blindly and substituted the group's personality for their own because they want to conform to the group ("The Wave"). We unfortunately don't know why Scott was drinking, but let us go on with this thought and pretend peer pressure was a drinking cause for him. In this case his fraternity brothers would have forced him to binge by putting mental stress on him. But aren't we all from the "Just say no" generation, and haven't we all been sufficiently brainwashed that there is nothing wrong with saying no to peer pressure and being what we want to be, even when it makes us different from a group? Scott could have easily turned around and left the house. I also wonder why he chose to live there in the first place. Like you provided in your Broadcast piece, everybody seemed to know, what was going on in this fraternity. ...read more.

They should have taught him that being different is nothing bad and he should never stop thinking for himself. Secondly, they could have checked the university, especially the fraternity house he would chose later and without much research they would have found its reputation. Why didn't they take that time together with their son, instead of accusing MIT for Scott's death now? They let him down by not being accountable parents during the time he needed them the most, the step from being a kid to becoming a responsible adult that thinks for himself and follows his own values. All in all, I don't think that your presentation of this story was fair. You clearly appealed on the emotions of the audience to feel bad for the Kruegers by showing them for 10 minutes in which they were glorifying their son, talking about how hard their lives are now and accusing MIT of being responsible for Scott's death. For some reason, the basic tenet that individuals should be held responsible for their own actions has become lost in the campus debates with respect to underage drinking. But people should know that actions have consequences and that they are responsible for those. What ever motive for Scott's drinking is the most reasonable one for you and whether you think that peer pressure was the cause or not; at the end it was his personal decision to swallow his own poison and he has to be held responsible for the consequence: his death. Sincerely, ...read more.