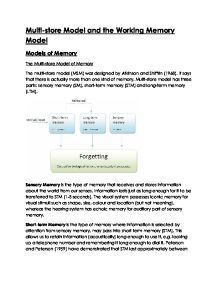 Multi-store Model and the Working Memory Model Models of Memory The Multi-store Model of Memory The multi-store model (MSM) was designed by Atkinson and Shiffrin (1968). It says that there is actually more than one kind of memory. Multi-store model has three parts: sensory memory (SM), short-term memory (STM) and long-term memory (LTM). Sensory Memory is the type of memory that receives and stores information about the world from our senses. Information lasts just as long enough for it to be transferred to STM (1-3 seconds). The visual system possesses iconic memory for visual stimuli such as shape, size, colour and location (but not meaning), whereas the hearing system has echoic memory for auditory part of sensory memory. ...read more.

STM also appears to mostly encode memory acoustically (in terms of sound) as Conrad (1964) has demonstrated, but can also retain visuo-spatial images. However in many cases STM can be semantic. Long-term memory is the third and the last type of memory that provides the lasting retention of information, from minutes to a lifetime. Long term memory appears to have an almost limitless capacity to retain information, but it could never be measured as it would take too long. Long term information seems to be encoded mainly in terms of meaning (semantic memory). Memory may also be transported directly from sensory memory to LTM if it receives instant attention. In addition to this, if information in the LTM is not rehearsed it can be forgotten through trace decay. ...read more.

what you are working on. The capacity of this memory model is limited. The Central Executive 'manages' the system - the other modules are 'slaves' to this one. It decides what needs to be done and when. The Phonological Loop is an auditory store, rehearsing information to prevent loss and decay. It has two parts: Phonological store: the 'inner ear' and the Articulatory loop: the 'inner voice'. The Visuo-spatial Sketchpad is the 'inner eye'. Organises information visually, as you would by sketching them out on paper. The strength of The Working Memory Model is that some brain-damaged patients are good at spatial but not visual tasks, evidence that we have a visual and spatial system (Farah et al 1988). The weakness of The Working Memory Model is that there is little evidence for the role of the central executive as most research is done on the other components. ...read more.