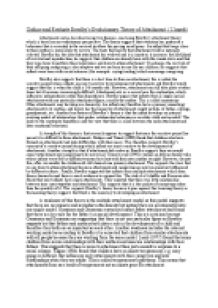 ﻿Outline and Evaluate Bowlby?s Evolutionary Theory of Attachment. (12mark) Attachment can be described using two theories, one being Bowlby?s attachment theory which is based on an evolutionary perspective. The theory suggests that evolution has produced a behaviour that is essential to the survival to allow the passing on of genes. An infant that keeps close to their mother is more likely to survive. The traits that lead to that attachment will be naturally selected. Bowlby has the idea that attachment has evolved and it is innate as it increases the likelihood of survival and reproduction, he suggests that children are already born with this innate drive and that they were born to perform these behaviours and born to attain attachment. To enhance the survival of their offspring caregiving is also adaptive and we are born to care for our children. ...read more.

This leads to the continuity hypothesis and the view that there is a link between the early attachment and later emotional behaviour. A strength of this theory is that research appears to suggest that once the sensitive period has passed it is difficult to form attachments. Hodges and Tizard (1989) found that children who have formed no attachments had later difficulties with their peers. This therefore supports Bowlby?s concept of a sensitive period during which infants are most sensitive to the development of attachments. Another strength is that if attachment did evolve as Bowlby suggests then we would expect attachment and caregiving to be universal. Tronick et all (1992) studied an African family tribe where infants were fed by different women but slept with their own mother at night. However, despite this, after six months the children all still showed one primary attachment. ...read more.

This is a criticism because Grossman and Grossman are suggesting that there is not one particular figure as Bowlby suggests but that fathers and mothers both play a role in the development of a child and therefore they both are as important as each other. Another weakness includes the internal working model as according to Bowlby it is expected that children form similar attachments with all people because they are working from the same model. Lamb (1977) found that some children form secure relationships with their mothers and insecure relationships with their fathers. This suggests that there is more to attachment than just a sensitive response to a social releaser. Kagan (1984) found that children have an innate temperament, e.g. easy going or difficult, that influences early attachments with their caregivers and later relationships when they are adults. This is called temperament hypothesis. This means that attachments form as a result of temperament not an innate gene for attachment. ...read more.

The writer has outlined and evaluated Bowlby's Theory of Attachment and has included many of the key points. However, the writer now needs to clarify and explain in more detail, some of the points made, especially the evaluation of Bowlby's theory. This part is slightly disjointed in places and at times reaches confusing conclusions.