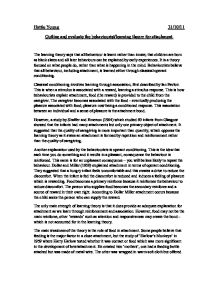 Outline and evaluate the behaviourist/learning theory for attachment.

Hattie Young 31/10/11 Outline and evaluate the behaviourist/learning theory for attachment The learning theory says that all behaviour is learnt rather than innate; that children are born as blank slates and all later behaviours can be explained by early experiences. It is a theory focused on what people do, rather than what is happening in the mind. Behaviourists believe that all behaviour, including attachment, is learned either through classical operant conditioning. Classical conditioning involves learning through association, first described by Ian Pavlov. This is when a stimulus is associated with a reward, learning a stimulus response. This is how behaviourists explain attachment, food (the reward) is provided to the child from the caregiver. The caregiver becomes associated with the food - eventually producing the pleasure associated with food; pleasure now being a conditioned response. ...read more.

explained attachment in terms of operant conditioning. They suggested that a hungry infant feels uncomfortable and this creates a drive to reduce the discomfort. When the infant is fed the discomfort is reduced and induces a feeling of pleasure which is rewarding. Food becomes a primary reinforce because it reinforces the behaviour to reduce discomfort. The person who supplies food becomes the secondary reinforce and a source of reward in their own right. According to Dollar Miller attachment occurs because the child seeks the person who can supply the reward. The only main strength of learning theory is that it does provide an adequate explanation for attachment as we learn through reinforcement and association. However, food may not be the main reinforce, other 'rewards' such as attention and responsiveness may create the bond - which is not accounted for in the learning theory. ...read more.

Both this study and the study by Schaffer and Emerson conclude that 'cupboard love' is not the best explanation for attachment. Validity is also questionable of the learning theory. Studies are largely based with animals and therefore there is not sufficient data to draw conclusions from their studies to directly apply to humans. Human behaviour is more influenced by emotions and the thinking process, which does not support the learning theory as it is oversimplified version of human behaviour. Overall the evidence for the learning theory is very weak. Although principles of the theory have been proved (Pavlov's dogs and the Skinner box) the main idea that food is the primary incentive for attachment is opposed by many studies. This suggests that the theory is too simple; it does not take in other 'rewarding' factors and is too oversimplified to be applied in human behaviour. ...read more.