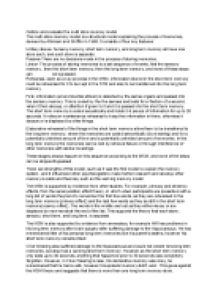 These stages always happen in this sequence according to the MSM, and none of the steps can be skipped/bypassed. There are strengths of this model, such as it was the first model to explain the memory system, and it influenced other psychologists to make further research and develop other memory models and theories, such as the working memory model. The MSM is supported by evidence from other studies. For example, primacy and decency effects, from the serial position effect theory, in which when participants are presented with a long list of words they tend to remember the first few words, as they are rehearsed in the long term memory (primacy effect) and the last few words as they as still in the short term memory(recency effect). ...read more.

This goes against the MSM theory and suggests that there is more than one long term memory store. Another case study, KF, had a motorbike accident as his short term memory was limited to 1 or 2 things, and his sensory memory didn't work. However he could form new long term memories, which also goes against the linear aspect of the MSM theory, as it suggests that the sensory memory can be bypassed. Another weakness of the MSM is that rehearsal is not essential to transfer information into the long term memory, for example we can recall how to do things such as playing a game without rehearsing the information, yet even with rehearsing we sometimes cannot recall information, such as long lists of words. This suggests that the importance of rehearsal in Atkinson and Shiffrin. The model has also been criticized by being a one way passive model. ...read more.