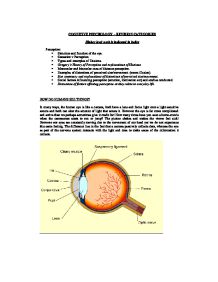 COGNITIVE PSYCHOLOGY - REVISION CATEGORIES Higher level work is indicated in italics Perception: * Structure and function of the eye. * Sensation v Perception. * Types and examples of Illusions. * Gregory's Theory of Perception and explanations of Illusions. * Monocular and binocular cues of distance perception. * Examples of distortions of perceived size/movement. (moon illusion) * Size constancy and explanations of distortions of perceived size/movement. * Social factors influencing perception (emotion, motivation etc) and studies conducted. * Discussion of factors affecting perception as they relate to everyday life. HOW DO HUMANS SEE THINGS? In many ways, the human eye is like a camera, both have a lens and focus light onto a light sensitive source and both can alter the amount of light that enters it. However the eye is far more complicated and active than we perhaps sometimes give it credit for! How many times have you seen a home-movie when the cameraman starts to run or jump? The picture shakes and makes the viewer feel sick! However our eyes are constantly moving due to the movement of our head yet we do not experience this same feeling. The difference lies in the fact that a camera passively collects data, whereas the eye as part of the nervous system interacts with the light and tries to make sense of the information it collects. Sensation: the physical stimulation of the sensory receptors. They are passive and respond only to stimulation. Perception: the process of interpreting and understanding sensory information. This is an active process. What is perception? Perception is all about examining the ways you organise your senses to form perceptions of the world around you. Perception is basically the act of interpreting the information, which reaches us through our senses. When we look at something, we don't just 'see' it - but make sense of it according to a number of different influences including our pre conceptions and past experiences. ...read more.

and daughter (who is not a giant!). The picture is of the famous Ames room. Strange things seem to happen in the Ames room. People standing on one side of the room appear huge, whereas people on the other side look tiny. People who walk from one side to the other appear to shrink or grow mysteriously dependent on which side they started from. The secret to the illusion will be discussed later. To perceive depth we rely on two types of information : Monocular cues (information provided by just one eye and include the objects height on a plane, linear perspective, overlap, relative size, gradient of texture, aerial perspective, shadowing and relative motion. On a normal TV screen only monocular cues give the sensation of depth.) and Binocular cues (information about depth provided by both eyes) We shall deal with each of these types of cues at a time and explain how they give us a sense of depth. Activity 3 - MONOCULAR CUES Using monocular cues of depth is what movie - makers use to make us believe the impossible - huge animals, monsters and aliens that interact with their normal environments. Monocular cues give us simple clues about distance: Height on a plane: We perceive things that are higher as further away. In a room objects that are further away always appear to be on a higher plane than those closest to us. Overlap(or superposition): We know that if one object appears to overlap another then it must be closer than the object it has overlapped. Relative size: As long as you know the size of an object you can judge how far away it is by seeing how large it appears relative to another object you can see. Linear Perspective: This is the idea that parallel lines look like they meet in the distance. This idea is the reason we are fooled by the Ponzo illusion (below). ...read more.

> PERCEPTUAL DEFENCE McGinnies(1949) used the term to explain why recognition of emotionally arousing words are slower then less arousing words. He asked participants to read out words from a card, some words were neutral whereas some were taboo. They researchers found the taboo words were slower to recognise. This suggests we have a perceptual defence against emotionally arousing words. Recently, critics have suggested the recognition of these words were faster and the delay was a reluctance to read them out. However if perceptual defence does exist, it raises the intriguing possibility that we somehow look at a stimulus in order to decide whether or not to perceive it. In fact considerable evidence exists for this kind of subliminal perception - the reception of stimuli which does not involve conscious recognition. For example studies have shown that there can be significant increases in bodily responses such as galvanic skin response (GSR) and self-ratings of anxiety following subliminally presented anxiety-arousing stimuli. > PREVIOUS EXPERIENCE The ace of hearts study by Bruner and Postman (1949)that we have already mentioned is an example of the way in which previous experience can dictate our perception.. LESSON 9 - PERCEPTION You should know - How the factors that affect perception can be applied to everyday life. You will - REVISE THE TOPIC. -1. What role does perceptual set have on stereotyping? -2. How do advertisers the influence of emotion? -3. What factors make proof-reading so difficult? -4. How does context effect our ability to read? -5. What are the dangers of emotion when crimes are committed? COGNITIVE PSYCHOLOGY - REVISION CATEGORIES Higher level work is indicated in italics Perception: * Structure and function of the eye. * Sensation v Perception. * Types and examples of Illusions. * Gregory's Theory of Perception and explanations of Illusions. * Monocular and binocular cues of distance perception. * Examples of distortions of perceived size/movement. (moon illusion) * Size constancy and explanations of distortions of perceived size/movement. * Social factors influencing perception (emotion, motivation etc) and studies conducted. * Discussion of factors affecting perception as they relate to everyday life. ...read more.