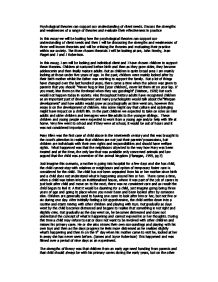 Psychological theories can support our understanding of client needs. Discuss the strengths and weaknesses of a range of theories and evaluate their effectiveness in practice

Psychological theories can support our understanding of client needs. Discuss the strengths and weaknesses of a range of theories and evaluate their effectiveness in practice In this essay we will be looking how the psychological theories can support our understanding of client needs and then I will be discussing the strengths and weaknesses of three well known theorists and will be critising the theories and evaluating their practice within our society. The three chosen theorists I will be looking at are, John Bowby, Jean Piaget and J and J Robertson. In this essay, I am will be looking and individual client and I have chosen children to support these theories. Children at nurtured before birth and then as they grow older, they become adolescents and then finally mature adults. But as children is quite broad area I am mainly looking at those under five years of age. In the past, children were mainly looked after by their birth mother whilst the father was working to support the family. But a lot of things have changed over the last hundred years, there came a time when the advice was given to parents that you should "Never hug or kiss [your children], never let them sit on your lap. ...read more.

But gradually as the day went on, he becomes distressed and does not understand the concept of what is happening and cannot express his or her thoughts. During this time a child may refuse to eat or does not want to be involved with other children and misses his primary carer. He or she also misses their own surroundings and playing with his own toys and then as the days progress he feels more distressed as he realises slightly what's happening and then in on the 9th day when his mother came to visit he, looked at her in away she has never seen before. (James and Joyce Robertson) This happened and was filmed over a period of nine days as an experiment. The strengths of theory was that children from an early age need bonding from parents and that child should always be with his primary carers during the early years, but on the other hand, it could effect the child later on in life and that could have an impact on quality of life. For example, not going out or mixing with other people and preferring own company. ...read more.

As although the mother can get close with the child, it will not be the same as picking up the child for the time and bonding. He also did a study of forty four young thieves and found links between their affectionless behaviour and their childhood experiences of chaotic families is marked by the lack of consistent caregiver and this could effect their equality. Why do some people commit crimes to get into prison? Some may argue that it could because of the lack of bonding at the early stages of life, childhood experiences, poverty, abuse or feelings of growing up fast. You could also crititise Bowbys by arging that there could be other factors that could affect the childhood development. For example, environmental factors could be as result of anti-social behaviour, for example Rutter, Quinton and & Hill (1990) argued that that peer pressure and relationships could play part in this, for example, children and adolescents are more likely to follow and conform to their friends and may seem more cooler than adults. Moffit (1993) argues that maternal drug use, poor prenatal nutrition, exposure to toxic agents, child abuse and birth complications could also contribute to anti-social behaviour. ?? ?? ?? ?? ...read more.