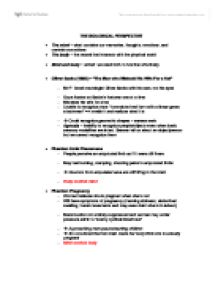 The biological perspective - The mind and the body.

THE BIOLOGICAL PERSPECTIVE * The mind ~ what contains our memories, thoughts, emotions, and controls our actions * The body ~ the vessel that interacts with the physical world * Mind and body ~ united: we need both to function effectively * Oliver Sacks (1985) > "The Man who Mistook His Wife For a Hat" - Mr P. faced neurologist Oliver Sacks with his ears, not his eyes - Gaze fixates on Sacks's features one at a time - Mistakes his wife for a hat - Unable to recognize rose: "convoluted red form with a linear green attachment" => smells it and realizes what it is - ==> Could recognize geometric shapes - senses work - Agnosia ~ inability to recognize people/objects even when basic sensory modalities are intact. Senses tell us about an object/person but we cannot recognize them * Phantom Limb Phenomena - People perceive an amputated limb as if it were still there - May feel burning, cramping, shooting pains in amputated limbs - ==> Neurons from amputated area are still firing to the brain - Body controls mind * Phantom Pregnancy - Woman believes she is pregnant when she is not - Will have symptoms of pregnancy (morning sickness, abdominal swelling, foetal movements and may even claim she is in labour) - Menstruation not entirely suppressed and woman may under pressure admit to "scanty cyclical blood loss" - ==> Approaching menopause/wanting children - ==> So convinced that her brain made her body think she is actually pregnant - Mind controls body * IMPORTANT LESSONS IN THE BIOLOGICAL PERSPECTIVE - It is possible to overpsychologize ~ many diseases have been blamed on psychological factors (bad mothering, bad attitudes), but biological research has proved this wrong - We are influenced by the workings of our bodies ~ to understand human beings we must understand the actions of genes, hormones, neurotransmitters, sensory organs and neurons * Dualism (Rene Descartes) ...read more.