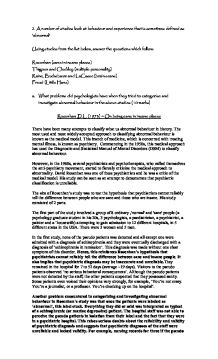 2. A number of studies look at behaviour and experience that is sometimes defined as 'abnormal' Using studies from the list below, answer the questions which follow: Rosenhan (sane in insane places) Thigpen and Cleckley (multiple personality) Raine, Buchsbaum and LaCasse (brain scans) Freud (Little Hans) a. What problems did psychologists have when they tried to categorise and investigate abnormal behaviour in the above studies (10 marks) Rosenhan ,D.L. (1973) ~ On being sane in insane places There have been many attempts to classify what us abnormal behaviuor in history. The most used and most widely accepted approach to classifying abnormal behaviour is known as the medical model. This branch of medicine, which is concerned with treating mental illness, is known as psychiatry. Commencing in the 1950s, this medical approach has used the Diagnostic and Statistical Manual of Mental Disorders (DSM) to classify abnormal behaviour. However, in the 1960s, several psychiatrists and psychotherapists, who called themselves the anti-psychiatry movement, started to fiercely criticize the medical approach to abnormality. David Rosenhan was one of these psychiatrists and he was a critic of the medical model. His study can be seen as an attempt to demonstrate that psychiatric classification is unreliable. The aim of Rosenhan's study was to test the hypothesis that psychiatrists cannot reliably tell the difference between people who are sane and those who are insane. His study consisted of 2 parts. The first part of the study involved a group of 8 ordinary ,'normal' and 'sane' people (a psychology graduate student in his 20s, 3 psychologists, a paediatrician, a psychiatrist, a painter and a 'housewife) attempting to gain admission to 12 different hospitals, in 5 different states in the USA. There were 3 women and 5 men. In the first study, none of the pseudo patients was detected and all except one were admitted with a diagnosis of schizophrenia and they were eventually discharged with a diagnosis of 'schizophrenia in remission'. This diagnosis was made without one clear symptom of this disorder. ...read more.

Freud, for example, argued that through the Oedipus complex boys identify with their fathers and this established their s****l identification and if this process could not take place, Freud considered that the young child would be likely to grow up h********l. However, evidence does not support this argument. In addition, another problem is that abnormal behaviour is difficult to generalize and compare since many cases are unique. For instance, Freud's case study only relates to one individual and therefore, precautions must be taken while generalizing from the findings. There is no way of assessing how typical Little Hans is and, therefore, it is questionable whether the study is unique to the relationship between Little Hans, his father and Freud or whether it can be generalized to other cases. b. What do these studies tell us about abnormal behaviour? (10 marks) Rosenhan, D.L. (1973) ~ On being sane in insane places The study suggests that once the patients were labeled as 'abnormal', the label stuck. Furthermore, because of this, it was learnt that the hospital staff were not able to perceive the pseudo patients in isolation from their label and the fact that they were in a psychiatric hospital, and this raises serious doubts about the reliability and validity of psychiatric diagnosis. It was discovered that psychiatric labels tend to stick in a way that medical labels do not and that everything a patient does is interpreted in accordance with the diagnostic label once it has been applied. Everything the pseudo patients did or said was interpreted as typical of a schizophrenic (or maniac depressive) patient. This means that the situations that the pseudo patients were in had a powerful impact on the way that they were judged. It was learnt that the normal behaviours of the pseudo patients were often seen as aspects of their supposed illness. For instance, the nursing records for three of the pseudo patients ("Patient engages in writing behaviour") ...read more.