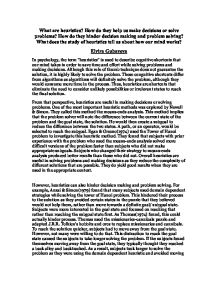 What are heuristics? How do they help us make decisions or solve problems? How do they hinder decision making and problem solving? What does the study of heuristics tell us about how our mind works?

What are heuristics? How do they help us make decisions or solve problems? How do they hinder decision making and problem solving? What does the study of heuristics tell us about how our mind works? Elvira Gubayeva In psychology, the term "heuristics" is used to describe cognitive shortcuts that our mind takes in order to save time and effort while solving problems and making decisions. Although this rule of thumb technique does not guarantee the solution, it is highly likely to solve the problem. These congnitive shortcuts differ from algorithms as algorithms will definitely solve the problem, although they would consume more time in the process. Thus, heuristics are shortcuts that eliminate the need to consider unlikely possibilities or irrelevant states to reach the final solution. From that perspective, heuristics are useful in making decisions or solving problems. One of the most important heuristic methods was explored by Newell & Simon. They called this method the means-ends analysis. This method implies that the problem solver will note the difference between the current state of the problem and the goal state, the solution. He would then create a subgoal to reduce the difference between the two states. A path, or an operator, would be selected to reach the subgoal. ...read more.

The media presents such a great number of fatal accidents that most think that death is more likely to be caused by an accident rather than diabetes. This is not the case, yet because an accident is easier to remember and had a greater impact on the mind most would consider the statement above to be true. Another problem with heuristics is that they become so deeply remembered in our minds after having dealt with a similar problem, that most subjects are not able to ignore the heuristic to solve a different problem quicker. An example of this is the monster-globe problems investigated by Simon& Hayes(1974). This is an isomorphic problem to the Tower of Hanoi problem with the same problem space. Since isomorphism ensured that both the problems had the same problem space features such as size and minimum solution path length, the experiment could focus on the difference presentations of the problem can make. Subjects had difficulty solving this problem even though they already had experience with the Tower of Hanoi problem. They were unable to solve the problem as the problem was presented to them in a different way. This hindered their decision making. The water-jug problem is similar as prior experience with a similar problem caused difficulty for subjects solving the problem. ...read more.

This could be adjusted by transfering information into the long term memory. A demonstration of this is proffessional chess players. Because the information they need to make a move while playing chess is stored in the long term memory due to a great number of past experiences with similar problems, they are able to present a greater number of moves than an average human. However, as Atwood, Masson&Polson found in 1980, there are greater limitations to our decision making ability than just a limited working memory. In an experiment to prove this theory, they presented the subjects with a problem and divided them in groups. They then presented all the possible moves to reach the solution in order to avoid overloading working memory. By doing this they hoped that there would be more space for more long term planning. However most subjects used the moves to avoid going back in the problem rather than find a quicker solution by more planning. There was no massive improvement in planning to find the solution. This experiment demonstrates that our mind is usually not efficient in long term planning. Overall, although heuristics can have a positive effect on our decision making and problem solving, they can also hinder decision making as they are too based on assumptions. Heuristics show that our mind takes the most logical shortcuts to solving a problem to save time and effort, although it is limited in its capacity to always find the right solution. ...read more.