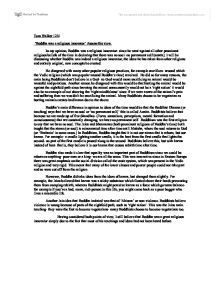 Tom Walker 12N 'Buddha was a religious innovator' Assess this view. In my opinion, Buddha was a religious innovator- since he went against all other prominent religious beliefs of the time in declaring that there was no soul- no permanent self (anatta). I will be discussing whether Buddha was indeed a religious innovator, the ideas he has taken from other religions and entirely original, new concepts he created. He disagreed with many other popular religious practices, for example sacrifices- around which the Vedic religion (which was popular around Buddha's time) revolved. He did so for many reasons, the main being Buddhists don't believe in a God- no God would mean sacrificing an animal would be wasteful and pointless. ...read more.

Buddhists believe that because we are made up of five Skandhas- (Form, sensations, perceptions, mental formation and consciousness) that are constantly changing, we have no permanent self. Buddhism was the first religion to say that we have no soul. The Jains and Shramanas (both prominent religions of Buddha's time) both taught that the atman (or soul) is reincarnated time after time until Moksha, where the soul returns to God (or 'Brahmin' in some cases.) In Buddhism, Buddha taught that it is not our atman that is reborn, but our karma. For example- a candle lighting another candle, it is the heat from the first candle that lights the second- no part of the first candle is passed along to the second. ...read more.

For example, the Jains believed that karma was a sticky substance which floated above their heads preventing them from escaping rebirth, whereas Buddhists might perceive karma as a force which governs balance- for example if you're a bad, mean, rich person in this life, you might come back as a poor beggar who lives a miserable life. Another Jain idea that Buddha imitated was that of 'Ahisma' or non-violence. Buddhists believe violence is wrong because of parts of the eightfold path, such as 'right action'. This was the Jains main teaching- they were the first to become vegetarians- many Buddhists choose to become vegetarians too. Having considered both points of view, I still believe that Buddha was a great religious innovator simply due to the fact that most of his teachings and ideas had not been heard before. ...read more.