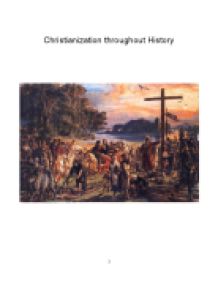 Christianization throughout History. I wanted to find out the true origins of the 3 major Christian holidays: Christmas, Easter and Halloween. Where their (sometimes strange) traditions came from

She became known as the goddess of fertility and the moon, mother of all life. She later became known as Ishtar, or Easter. Semiramis soon became pregnant, claiming that is the rays of the sun god Baal which caused her to conceive. She gave birth to Tammuz, who was the supposed savior, the son of God. Tammuz was a hunter, and was one day killed by a wild boar. He was sent to the underworld, but through his mother?s weeping he was resurrected and allowed to ascend to be with his father Baal. Another version tells that Semiramis (or Ishtar) was so grief stricken that she followed Tammuz to the underworld. With her gone, the world became a cold and barren place. Ea, the Babylonian God of water and wisdom, sprinkled them both with the water of life, allowing them to return to the world for 6 months of the year. The remaining part of the year Tammuz was to return to the underworld, causing Ishtar to follow him and the cycle to continue. This is how the people explained to themselves the miracle of spring that happened every year. Each year a spring festival was held to celebrate Tammuz?s resurrection from the underworld on the first Sunday after the full moon of the spring equinox, Ishtar Sunday. All of the common Easter traditions originate from this belief. Ham was to be eaten as a reminder of Tammuz?s death. The sunrise worship service is a common pagan practice honoring the Sun God. The egg is probably the oldest symbol of fertility and new life in pagan worship. Then there is the story of Ishtar?s hatching from the moon egg, known as the Ishatr, or Easter egg. The hare too, is an old fertility symbol, due to its rapid rate of reproduction. The story of the Easter bunny brings us back to Ishtar, or Ostara as she was called in northern Europe. ...read more.

Samhain and The Day of The Dead were absorbed into Halloween. Their traditions and rituals were preserved and incorporated into the new holiday, but their names were omitted. However, now, despite all of the Christian efforts, people essentially enjoy the aspects of the holiday that derive from pagan origins. The Halloween celebrated by the great majority of people today is just a fun holiday, and has lost its religious signifance for most people. Conclusion To summarize everything, I believe it can be safely said that Christian holidays rarely mean and originate where they seemed to at first. Christianization can be found throughout history in many different cultures and aspects, from major holidays to minor superstitions. Celebrations of the winter solstice were common around the world, and Christmas was just the latest addition. The early Christians merely replaced the birth of the sun with the birth of the son, but kept the rituals and traditions of the pagan festivals. The Easter holiday even managed to keep its pagan name. The festival of the earth's rebirth is recycled today as the day honoring the resurrection of Jesus, and celebrated in the same way the Babylonians did 3000 years ago. Even Halloween is just a pagan holiday dipped in holy water. It's as pagan as you can get, honoring ghosts, spirits and the like, but it got Christianized nonetheless. In my personal opinion, there is nothing religious about these holidays anymore. They merely represent how far ideas can travel when you take advantage of human nature. The early Christians understood that people are just simple beings who like to have a good time, and don?t really care in whose honor. Christianization was a smart idea, but I believe it breaks a few copyright laws. Working on this project I improved my research and writing skills, and also my time management. If I had been given the chance I would have written more about the Christianization of sacred places, like the pantheon and Celtic sacred groves. All in all, I learned a lot during the entire process and am satisfied with the result. ...read more.