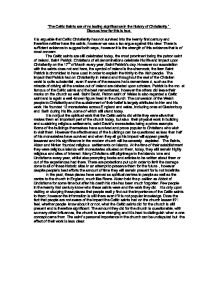 The Celtic Saints are of no lasting significance in the history of Christianity. Discuss how far this is true.

'The Celtic Saints are of no lasting significance in the history of Christianity.' Discuss how far this is true. It is arguable that Celtic Christianity has not survived into the twenty first century and therefore neither have the saints, however we was also argue against this view. There is sufficient evidence to suggest both ways, however it is the strength of this evidence that is of most concern. The Celtic saints are still celebrated today, the most prominent being the patron saint of Ireland, Saint Patrick. Christians of all denominations celebrate his life and impact upon Christianity on the 17th of March every year, Saint Patrick's day. However our association with the saints does not end here, the symbol of Ireland is the shamrock, the item Saint Patrick is chronicled to have used in order to explain the trinity to the Irish people. ...read more.

He founded 12 monasteries across England and wales, including ones at Glastonbury and Bath during his life, some of which still stand today. It is not just the spiritual work that the Celtic saints did while they were alive that makes them an important part of the church today, but also their physical work in building and sustaining religious settlements, saint David's monasteries being a prime example. Some of the buildings themselves have survived and prove popular to Christians who wish to visit them. However the effectiveness of the buildings can be questioned as less than half of his monasteries have survived and when they all go his impact will appear greatly lessened and his significance in the modern church will be severely depleted. ...read more.

Few people in the twenty first century know who these saints were and the work they did. It is only upon visiting or studying these places that people really find out the importance of the Celtic saints to them; however the information is still there even if it is not popular knowledge. Does the fact that people are not aware of the impact the Celtic saints had on the church lessen it? I feel, whether people know about it or not, what the Celtic saints did for the church is still present and is therefore significant. The amount they did for the church is questionable, with so many other influences, the church is ever changing and it is hard to distinguish where one concept came from. The saint's personal importance in the church can be undisputed but the effect of their work is less clear. ...read more.