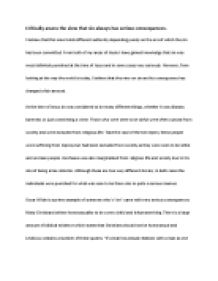 Critically assess the view that sin always has serious consequences

﻿Critically assess the view that sin always has serious consequences. I believe that this view holds different authority depending purely on the era of which the sin has been committed. From both of my areas of study I have gained knowledge that sin was most definitely punished at the time of Jesus and in some cases very seriously. However, from looking at the way the world is today, I believe that the view on sin and its consequence has changed a fair amount. At the time of Jesus sin was considered to be many different things, whether it was disease, bareness or just committing a crime. Those who were seen to be sinful were often outcast from society and were excluded from religious life. Take the case of the ten lepers; these people were suffering from leprosy but had been excluded from society as they were seen to be sinful and unclean people. ...read more.

From this one line in the bible we can see that Christians have been strongly influenced to believe that homosexuality is in fact a sin. Oscar Wilde was a very famous play write in the 1800?s and during his 40?s it was discovered by the public that he was having a h********l relationship. Wilde was imprisoned for his s****l orientation and was sent to trial at Queensbury in 1895. The judge claimed that this was the worst case he had ever seen and Wilde was charged for sodemy and gross indency. After carrying out is sentence, Oscar Wilde exiled to Nepales with his partner as he was no longer accepted into society. Although Wilde held a very high status in England at the time and was respected by many, his sin greatly affected his reputation. ...read more.

Sin comes with personal punishment as well as punishment from society. Those who commit a sin against God often repent and highly regret their actions, often leading to self loathing and guilt. In some cases this can go on to greatly affect the individual?s life, showing that the one sin that they have committed has had serious consequences on their life in the long run. As you can see sin can cause a number of different consequences, those more serious than others. However i believe that as we progress into more modern times, people are becoming more forgiving of sins and offer sinners repentance through such things as confessions. The consequences of crime may be serious in many cases such as Oscar Wilde, but i personally believe that over many years, Christians have progressed with the times that they are living in and are becoming more accepting of sinners who show repentance. Therefore the consequences of these sins are become less serious. ...read more.