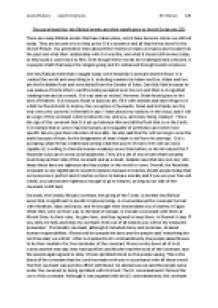 ﻿Jessica Rubens Jewish Scriptures Mr Marcus 12B Discuss at least four key Biblical events and their significance to Jewish Scriptures (25) There are many Biblical events that have taken place, which have become stories we still tell today. They are around now to help prove G-d?s existence and all that he has done for the Jewish People. Our generation learn about these events to teach us lessons and morals from the past and what their relationship with G-d was like, and what it should still involve today, to help build a connection to Him. Even though these morals are challenged and criticised, it is people?s faith that keeps the religion going and it?s enhanced through Jewish scriptures. One key Biblical event that is taught today is the Noachide Covenant and the flood. G-d created the world and everything in it, including mankind as Adam and Eve. Adam and Eve ate the forbidden fruit and were exiled from the Garden of Eden, Cain kills Abel because he was jealous of his brother?s sacrifice being accepted over his own and then G-d regretted creating man and as a result, G-d was seen as wicked. However, Noah found grace in the eyes of Hashem. G-d instructs Noah to build an ark, fill it with animals and take refuge to it whilst he floods Earth to destroy the corruption of humanity. ...read more.

The 10 commandments formed the core of this covenant. Although it was equated with the 10 commandments, the covenant also included all laws and commandments that G-d wrote for our instruction. Therefore, the Sinaitic covenant is like a marriage ceremony; G-d provides Israel with needs, then Israel is loyal to G-d so they wont worship or embrace others and finally, G-d and Israel love each other so commit so one another. This tells us what our relationship should be like with Hashem and teaches us to follow all the commandments and mitzvoth from the Torah, as He is very important to the Jewish people and to Jewish Scriptures. The third covenant, the Adamic covenant, creation, is another key Biblical event that is significant to Jewish Scriptures. This covenant describes G-d creation of humanity. It establishes the key expectations that G-d has for Adam and humanity in general. It is therefore a universal covenant. The term ?Adamic Covenant? expresses the timeless relationship with G-d has with the creation in general and with humans in particular. Unlike the other covenants, the Adamic Covenant does not state explicitly what humans have to do in order to maintain it. Instead, the duties of the covenant are implied through G-d?s blessings. ...read more.

?Hashem will take Avraham to a promise land? and ?leave your father and homeland? and ?follow Hashem to a promised land?. Rashi believe that by Hashem only telling Avraham that he was taking him to a promise land it kept Avraham in suspense, it therefore made the destination more beloved in Abraham?s eyes. It also enabled him to be rewarded for every step he took, as he had enough trust in G-d to follow him. The Torah expresses Abraham?s test was in ascending difficulty ? it is hard to leave ones homeland, harder to leave ones extended family, and harder than both to leave ones parents. It is important to Jewish Scriptures because this covenant is still in place today and many people can learn to have faith in Hashem and trust Him, and in return, G-d will keep on looking after you and it helps people to believe there is only one G-d. In conclusion, there are many key Biblical events that have taken place and that are still commented on and read in Jewish Scriptures so people can learn morals and lessons from the past. We can also learn what our relationship with G-d should be like and that no matter what, having faith in our own religion is the most important thing. ...read more.