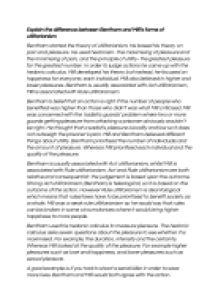 Explain the difference between Bentham and Mills forms of utilitarianism

Transfer-Encoding: chunked ﻿Explain the difference between Bentham and Mill?s forms of utilitarianism Bentham started the theory of utilitarianism. He based his theory on pain and pleasure. He used hedonism- the maximising of pleasure and the minimising of pain, and the principle of utility- the greatest pleasure for the greatest number. In order to judge actions he came up with the hedonic calculus. Mill developed his theory but instead, he focused on happiness for everyone, each individual. Mill also believed in higher and lower pleasures. Bentham is usually associated with Act utilitarianism, Mill is associated with Rule utilitarianism. Bentham?s belief that an action is right if the number of people who benefited was higher than those who didn?t was what Mill criticised. ...read more.

However, if there was more than one murderer and only one victim, Bentham and Mill would disagree with each other. Bentham would say that the greatest number, in this case the murderers should get their pleasure. There is only one victim so Bentham would say the pleasure that the murderers get from killing the victim outweighs the pain of the victim. Whilst Mill would argue that the pleasure of the murderers is low and so cannot outweigh the real pain of the victim. For Mill the two murderers should be killed in order to make a healthier society. To conclude, Bentham focused on the quantity of pleasure, whilst Mill focused on the quality. Bentham is associated with Act utilitarianism whilst Mill is associated with Rule utilitarianism. However they both focused on the principle of utility and maximisation of happiness. ...read more.