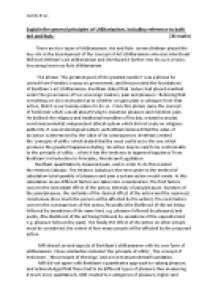 Explain the general principles of Utilitarianism, including reference to both Act and Rule.

﻿Camille Brien Explain the general principles of Utilitarianism, including reference to both Act and Rule. (30 marks) There are two types of Utilitarianism, Act and Rule. Jeremy Betham played the key role in the development of the concept of Act Utilitarianism whereas John Stuart Mill took Betham?s act utilitarianism and developed it further into his own version, becoming known as Rule Utilitarianism. The phrase ?The greatest good of the greatest number? was a phrase he coined from Priestley?s essay on government, and this provided the foundations of Bentham?s act Utilitarianism. Bentham stated that ?nature had placed mankind under the governance of two sovereign masters, pain and pleasure.? Believing that everything we do is motivated as to whether we gain plain or pleasure from that action, that it is our human nature to do so. From this phrase came the concept of hedonism which was all about trying to maximise pleasure and minimise pain. ...read more.

Bentham was very focused on the motives of an action as well as the consequences whereas Mill believed that the consequences of an action can be good even if the motive is bad, for example, saving a person from drowning with the hope of a financial reward. Thus believing that despite the fact that people are motivated by self-interest this can simultaneously promote the general happiness of society. Mill determines the ?rightness? or ?wrongness? of an action according to its consequences, whether pleasure is produced or pain prevented is the primary aim whereas the motives of the agent are irrelevant. In conclusion the general principles of Utilitarianism are that it is teleological and the consequences, as long as they increase pleasure or prevent pain are of paramount importance. It is a secular, non-transcendental ethical system completely independent from religion, which focuses around the concept of hedonism and the principle of utility. In regard to Act and Rule Utilitarianism there are many differences but their fundamental principles remain the same. ...read more.