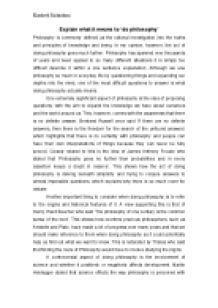 Explain what it means to 'do philosophy'

﻿Elisabeth Richardson Explain what it means to ?do philosophy? Philosophy is commonly defined as the rational investigation into the truths and principles of knowledge and being. In my opinion, however, the act of doing philosophy goes much further. Philosophy has spanned over thousands of years and been applied to so many different situations it is simply too difficult describe it within a one sentence explanation. Although we use philosophy so much in everyday life by questioning things and expanding our depths into the mind, one of the most difficult questions to answer is what doing philosophy actually means. One extremely significant aspect of philosophy is the idea of proposing questions; with the aim to expand the knowledge we have about ourselves and the world around us. This, however, comes with the awareness that there is no definite answer. ...read more.

we should make reference to them when doing philosophy as it could potentially help us find out what we want to know. This is reiterated by Thales who said that finding the route of Philosophy would have to involve studying its origins. A controversial aspect of doing philosophy is the involvement of science and whether it positively or negatively affects development. Martin Heidegger stated that science effects the way philosophy is perceived with some saying it is an ?immature science?. Bertrand Russell differentiates the two by saying ?Science is what you know, philosophy is what you don?t know?. It is questionable whether the aspect of certainty in science draws importance away from and belittles philosophy. Aristotle explained philosophy is ?the science which considers truth? which introduces the idea of logic, one of the many branches of philosophy. ...read more.

?What does it mean to do philosophy?? is an extension to a list of unanswerable questions because even using all these methods of analysing we can never have one answer. In conclusion, Philosophy is an open-ended study and doing it means you are challenged with a series of almost impossible questions where there is always room for debate. What it truly means to ?do philosophy? is a controversial question in itself, which people will have their own opinion on. Personally, I think, to do philosophy is to be deeply intrigued by the wonders of knowledge and being. Bertrand Russell had said ?do not fear to be eccentric? which is something I agree with because philosophy is all about new approaches and people?s own interpretation of things and one of those interpretations would be what it means to a particular person to ?do philosophy?. An answer to this question can?t be accepted as a solid definition because nothing is ever accepted as truth in philosophy and there is always an element of doubt involved. ...read more.