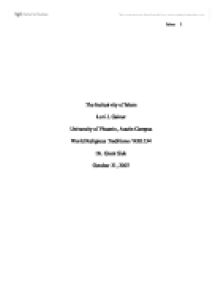 The Inclusivity of Islam Lori J. Gainer University of Phoenix, Austin Campus World Religious Traditions / REL134 Dr. Grant Sisk October 31, 2007 The Inclusivity of Islam There exists today an innumerable count of religions. This situation occurs simply because the definition of religion includes, "a specific fundamental set of beliefs and practices generally agreed upon by a number of persons or sects" (religion, n.d.). Since this definition does not specify what the 'number of persons' includes, two people might share a common belief and call it a religion. Many of the world's leading identified religions, are permeated with the idea, perception, or determination that one religion is preferred, or better, or more right, over another. This is not the case within the religion of Islam. This faith tradition "offers hope for salvation to the righteous and God-fearing of all religions" (Masud, 2005). In this sense, Islam is more inclusive than many other religions. There is much about this faith that is not widely known, properly identified, or openly discussed; especially in light of recent media events. HISTORY According to the CIA's World Factbook, documentation of religious adherents is noted as, "Christians 33.03% (of which Roman Catholics are 17.33%, Protestants 5.8%, Orthodox ...read more.

Allah's Eternality: Allah never had a beginning and will never have an end. He is uncaused and necessary. It is impossible for Allah to ever not be. Allah as Revealer: Allah is seen in nature and in the pinnacle of creating, man, but chiefly in His direct contact with the prophets he chose. Allah has revealed Himself to every nation, but that over the course of time only four of these revelations were kept, namely, the Law of Moses, the Psalms of David, the Gospel of Jesus, and chiefly, the Qur'an (Robinson, 1995). Muslims believe there are many attributes of God, and these attributes are presented in the divine revelations of the Qur'an as given to the Prophet Muhammad. The foundations of the Islamic faith include 5 pillars. These pillars are patterns for worship and highly detailed prescriptions for social conduct. The basic premise underlying each pillar is that Allah is to be present in every aspect of human existence. The pillars provide adjunctions against specific behaviors and positive measures which commend human aspects of kindness, justice and charity. The 5 pillars of this faith include: believing and progressing the unity of God by providing an informed choice for people to believe, continual ...read more.

These followers are the Sunnis. While Sunnis follow the elected Caliph, Shiites follow the successor in the lineage of Muhammad. Yet another distinction within the Muslim community is the Sufites. Those who follow Sufism are devout Muslims who live lives of poverty; believing that Allah will provide for their needs, just as He does the birds of the air, if one only has trust and faith. Sifites receive criticism from some Muslims indicating that they should not live with their heads so far in the heavens that their feet are not on the ground. CONCLUSION Judaism, Christianity and Islam each find its traditions dating through the Jewish lineage to Abraham; who is considered to be the father of all faiths. Many theologians agree that Judaism is the foundation of Christianity, and Islam builds on Christianity to be the final corrective word from God, Abba, Allah. The biggest differentiation between these three faith traditions is seen in the 'humanness' of God. The Jewish tradition sees God as the Creator, Christianity acknowledges God as a triune being of Creator, Christ and Holy Spirit, and Islam views Allah as one and only authority to which a life should be lived in complete surrender. Each tradition identifies a time or day of judgment when all beings will be accountable for the actions of their life. ...read more.