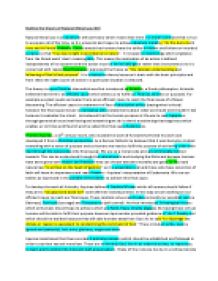 Natural Moral Law - in theory and in practice.

﻿Outline the theory of Natural Moral Law (18) Natural Moral Law is an absolutist ethical theory which means that there is a moral command that is true to everyone all of the time, so it is universal and hopes to achieve absolute morality; ?As fire burns both here and in Persia? Aristotle. Cicero stated that humans have the ability to reason and follow an intended purpose so that ?true law is right in accordance to nature?. It is based on deontology which originates from the Greek word ?deon? meaning duty. This means the motivation of an action is defined independently of its outcome and the action must be intrinsically good rather than instrumental. As it is concerned with reason Mel Thompson expressed the theory as ?the rational understanding and following of God?s final purpose?. It is a deductive theory because it starts with the basic principles and from these the right course of action in a particular situation is deduced. The theory is a pre-Christian idea which was first introduced by Aristotle, a Greek philosopher. Aristotle believed that there is an efficient cause which allows us to fulfill our Final cause (telos or purpose). For example we plant seeds and water them as an efficient cause to reach the final cause of a flower blossoming. The efficient cause is a statement of fact of descriptive ethics (saying what is there) however the final cause moves to normative ethics (statements about what we should and shouldn?t do) ...read more.

This provides the reason behind an immoral action despite their fundamentally good nature. They are pleasurable but will ultimately lead to a fall short of our potential. These include adultery, binge drinking, overeating and s*x. ?A fornicator seeks a pleasure which invokes him in moral guilt.? Bernard Hoose and Richard McCormick have developed natural moral law in recent years in order to simplify it so that it is more applicable in the 21st century. They proposed the idea of Proportionalism which suggests that natural moral law is not just a strict set of absolute laws but a system of guidelines for us to use and navigate ourselves. Hoose said ?it is never right to go against a principle unless there is a proportionate reason which would justify it.? Proportionalism can be used to justify an action such as not treating a terminally ill person because the treatment being suggested may cause more pain for the person as a result and the pain would be disproportionate to the outcome of the treatment not going ahead. Evaluate the view that Natural Moral Law fails to be a practical theory in the 21st century (12) Christians, in particular Roman Catholics, still value Natural Moral Law and use it for guidance because it is an example of absolute morality and provides a set of clear cut rules. There is no need to look at each individual situation because it is unchanging and universal. It is also made accessible by our reason and it makes God?s reason accessible to a believer because humans and God share rationality. ...read more.

The doctrine of double effect and casuistry are also often seen as a way of introducing exceptions to the rules. The leniency which Aquinas applies with the idea of real and apparent goods many allow people to unintentionally commit evil acts because they can justify an act by a good intention because they do not need to consider the consequences of their actions. This shows serious flaws in the practicality of the theory in the 21st century and could potentially justify Hitler?s actions of killing the Jews because he strove for the apparent good of ethnic cleansing. Overall it is really ?a threshold of your own conviction and a matter of personal taste? as Paul Davies said, as to whether you accept the practicality of this principle in the 21st century. It is still practical for many Roman Catholics and provides a definite theory which can be applied universally, however in my opinion it is far too impersonal and impractical when dealing with situations of complexity such as those which we see in the modern world and 21st century, including Euthanasia, Abortion and homosexuality therefore I agree with Bertrand Russell who argues that the theory ?appeals to the respectable middle class.? These have conflicting precepts which make them difficult to determine with an absolutist theory. Personally I prefer the relativist stance which takes each individual situation into account and is more personable and flexible which allows the cultural diversity which we see in the world today. I would agree with Kai Neilson that ?the idea of human natural is a culturally constructed concept, not a scientific one.? ...read more.