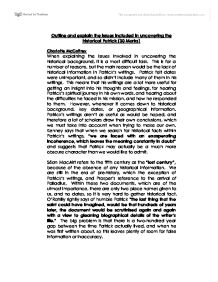 Outline and explain the issues included in uncovering the historical Patrick (30 Marks) Charlotte McCaffrey When explaining the issues involved in uncovering the historical background, it is a most difficult task. This is for a number of reasons, but the main reason would be the lack of historical information in Patrick's writings. Patrick felt dates were unimportant, and so didn't include many of them in his writings. This means that his writings are a lot more useful for getting an insight into his thoughts and feelings, for hearing Patrick's spiritual journey in his own words, and hearing about the difficulties he faced in his mission, and how he responded to them. However, whenever it comes down to historical background, key dates, or geographical information, Patrick's writings aren't as useful as would be hoped, and therefore a lot of scholars draw their own conclusions, which we must take into account when trying to make our own. Kenney says that when we search for historical facts within Patrick's writings, "we are faced with an exasperating incoherence, which leaves the meaning constantly in doubt" and suggests that Patrick may actually be a much more obscure character than we would like to admit. ...read more.

Charles Thomas believes that the only place to fulfil all three criteria would be the North West of Britain. He concludes that the most likely location is Carlisle, which "entirely outweighs that of Daventry, Dumbarton or elsewhere." It is also far enough North to explain Patrick's poor use of Latin. Dark warns us that any attempt to locate Bannavem Taburniae is based on assumptions, and cannot be taken as facts; however he believes the only place we can safely say for definite suffered from frequent raids by the Irish during the fifth and sixth century were the areas of Cotswolds and Dorset. There has also been a great deal of debate in regards to the location of Silva Foclutti (the wood of Foclut). It arises in Patrick's narration of the "call", when he says "As I read the beginning of the letter, I seem to hear the voice of those who were by the wood of Foclut which is near the western sea, and they cried as with one voice, Holy Boy, we are asking you to come and walk among us again." Bury O'Rahilly and Hanson assume that this is referring to the place of Patrick's captivity, and Mohrmann agrees, saying interpreting Patrick's words seems to suggest that "they are from the mouth of people ...read more.

The unresolved debate regarding Patrick and Gaul has led many to believe that some of the details of the life of the historical Patrick can never be resolved, and are forever lost to the historian. Others argue that the most important part of Patrick, such as his personality shall be preserved for eternity, in his own writings. There is so little historical information about Patrick that there is even conflict regarding the dating of Patrick, even his death. Charles Thomas believes that Patrick wrote his letter to Coroticus at some time between 465-475, and that the Confessio was written sometime after 480. He says that "the annalistic dates from his death cluster around the early 490's may reflect with some reality, the tradition that he dies before the end of the century." In 1942, Thomas O'Rahilly suggested a later dating for Patrick's mission, still within the fifth century. He took the evidence from the fifth and sixth century annals into account, and concluded that Patrick arrived in Ireland in 461, and died in 492/3. In conclusion, although it is very difficult to determine historical fact in regard to Patrick, if we focus on hints within his letters, scholarly opinion, and what he says himself, we can come up with some possible dates and locations for Patrick's birth, mission, and death, and this will hopefully in time become more conclusive. ...read more.