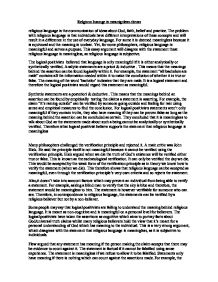 Relgious lnaunge is meanignless dicuss religious language is the communication of ideas about God, faith, belief and practice. The problem with religious language is that individuals have different interpretations of these concepts and will result in a difference in the use of everyday language. For some it is deemed meaningless because it is equivocal and the meaning is unclear. Yet, for some philosophers, religious language is meaningful and serves a purpose. This essay argument will disagree with the statement theat religious language is meaningless, as religious language is subjective. The logical positivists believed that language is only meaningful if it is either analytically or synthetically verified. Analytic statements are a priori & inductive . This means that the meanings behind the assertion can be found logically within it. For example, the statement "all bachelors are male" contains all the information needed within it to make the conclusion of whether it is true or false. The meaning of the word 'bachelor' indicates that they are male. It is a logical statement and therefore the logical positivists would regard this statement as meaningful. Synthetic statements are a posteriori & deductive . This means that the meanings behind an assertion can be found by empirically testing the claims a statement is asserting. For example, the claim "it's raining outside" can be verified by someone going outside and feeling for rain using sense and empirical measures to find the conclusion. ...read more.

The statement is meaningless if we refuse to allow it to be falsified. Statements only have meaning if there is nothing which can count against the assertions made. For example, the statement "red is a colour" is true as it is an analytic, a priori statement which is inductive,as it is true by definition. Flew argued that religious language is meaningless as religious statements do not allow for any evidence to count against them. Also, religious statements cannot be prove verified because religious believers do not allow for any evidence to count falsify their beliefs. For flew there is no difference between non-falsifiability & meaningfulness. Flew argued that Christians hold the belief that "God is good" regardless of the evidence given against it. Flew would label the religious statements meaningless as they "die a death by a thousand qualifications" flew uses wisdoms parable of a Gardner. wo explorers come across a clearing in a jungle. It contains a mixture of weeds and flowers. One claims that there must be a gardener who comes to tend the clearing. The other denies it. They sit and wait, but no gardener appears, however they try to detect him." One gardener continues to claim that there is a gardener; one who is invisible, inaudible, intangible and undetectable. Flew argues that, in the same way, if a believer's statement about God can be made to fit into any circumstance, it is not meaningful and has no empirical implications. ...read more.

We cannot apply the rules of rugby to basketball, that would be absurd. The same way we cannot apply rules and the beliefs of scientific language to religious language. They are two different things, it is like comparing apples with pears. For believes miracles, the Bible etc are all sufficient evidence for the claims they are making so trying to apply a scientific criteria does not make sense. This is a strong augment against the statement the religious language is meaningless Wittgenstein has a some critics to his theory. The first is that different faiths have a different language game and it is extremely difficult to share those differences between the religions. Secondly, all religious believers are involved in different language games in one way or another. Religious language has not become totally isolated so there must be a common ground between religious language and other language games. If there is a common ground, non believers are able to understand religious language and decide whether or not it has a meaning for them. Thirdly, non believers might be able to understand the language better than a religious believer as they have an objective view on the use of the religious language. Believers take the language for what it is and cannot be subject to anything else. In conclusion, believers would agree it is difficult to talk about God. The meaning of the word God applies to a being beyond human understanding. Believers recognise that any discussion of God is limited, but they would argue religious language does have meaning and purpose. ...read more.