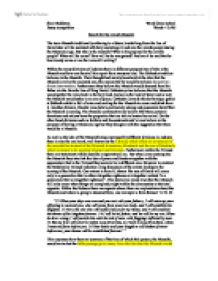 Search for the Jewish Messiah

Search for the Jewish Messiah The term Messiah traditionally referring to a future Jewish king from the line of David who will be anointed with holy anointing oil and rule the Jewish people during the Messianic age. But who is the messiah? What is his purpose for the Jewish people? When will he come? How will he be recognised? And can it be said that he has already come or are the Jews still waiting? Within the many divisions of Judaism there is different perspectives of who is the Messiah and how can they tell him apart from everyone else. The Orthodox tradition believes in the Messiah. Their thought had mainly been held at the idea that the Messiah is to be the anointed one; this means that he would have been chosen by a divine intervention. Furthermore they believe the Messiah would descend from his father via the Davidic line of King David. Orthodoxy also believes that the Messiah would gather the Jews back in the holy land, known as the land of Israel and as well the Messiah would usher in an era of peace. Orthodox Jews do this by having a goblet at Sabbath which is full of wine and waiting for the Messiah to come and drink from it. Another division, Hasidic Jews hold a particularly strong and passionate belief that the Messiah is coming. ...read more.

The fifth motion of the Messiah would be the judgement of mankind where the messiah is either showing the last judgement before the end of the world or a new era of the world beginning or the idea of the Messiah judging them reflects the idea that god is judging them and selecting the righteous. The final motion in Maimonidies 12th principle is that the Messiah would come in the form of a person and would be a descendent from the house of King David. Therefore this explains what many Jews believe the Messiah would do for them when he comes. But it also opens a lot of interpretation and evaluating areas for them selves for example, how would he re build the temple? And how can he resurrect the dead? This then suggests that the search for the Messiah would be enabled by Maimonidies because they are aware that Messiah will have the spiritual powers to do and how the Jews are able to recognise him by the principles which Maimonidies believe from ancient text such as the torah. Therefore the Messiah's actions were well presented by God. On the other hand non orthodox Jews belief is held in some of Maimonidies 12th principle but they also hold there own belief which they feel will help end the search for the Jewish Messiah. The non orthodox ideas are that it is going to be a Messianic age rather than having a Messiah in the form of flesh and blood, therefore this Messianic age would still bring peace and harmony referring to Maimonidies. ...read more.

For orthodox Jews to fulfil the search then they feel their every day actions are judged by god and they feel that completing actions, for example; Torah and Mitzvos, as well completing circumcision and Niddah and obey Koser. These actions are then judged by God to see if they are capable of keeping his laws then its God choice to send the descendent of Kings David's family to lead them further in to peace and harmony. To conclude the search for the Messiah cannot have a strong particular answer to it as there are many interpretations in to many aspects as to what the main purpose to hasten his arrival is but it is not necessarily to find the Messiah. For orthodox Jews their search for the Messiah is extended to the idea that they believe he is coming and if they fulfil their daily purposes then it will hasten his arrive and therefore they will enter an age of peace and have their temple re built for them. On the other hand the non orthodox search for the messiah has a better influence on the idea of a Messianic age which they are waiting for. Finally most of the Jewish search for the Messiah is based upon the idea of waiting for him and being faithful to God so god can determine when the Messiah will arrive. Sian Middleton Wood Green school Essay competition Words = 2,465 ...read more.