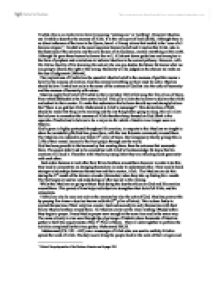 Tawhid, this is an Arabic term literally meaning 'making one' or 'unifying'. However Muslims use Tawhid to describe the oneness of Allah.

Tawhid, this is an Arabic term literally meaning 'making one' or 'unifying'. However Muslims use Tawhid to describe the oneness of Allah. It is the main part of Iman (faith). Although there is no direct reference of the term in the Quran, Ismail al Faruqi claims that tawhid is the 'core of all Islamic religion'1. Tawhid is the most important Islamic belief and it implies that Allah, who is the Sustained of the universe and the sole Source of its Guidance, creates everything on this earth. Although He gave these human believers free will, Allah sent down guidelines and examples in the form of prophets and revolutions to indicate Muslims in the correct pathway. However, with His Divine Quality of For-knowing He and only he can pre-destine the future He knows what we are going to choose the right or the wrong. Humanity will be judged on the choices we make on the day of judgement (Akhirah). The implications of Tawhid are the essential Muslim belief in the oneness of god this means a belief in the oneness of creation. God has created everything so there must be unity. Muslims should believe Tawhid not only in the sense of the oneness of God but also the unity of humanity and the oneness of humanity with nature. Muslims apply their belief of Tawhid in their everyday life by following the five pillars of Islam, from which Shahadah is the first central belief. This pillar allows the believer to declare their faith and submit to their creator. To make this submission the believer should say and strongly believe that "there is no god but Allah: Muhammad is Allah's messenger". This declaration of faith should be made first thing in the morning and the last thing before going to sleep, this will allow the believer to remember the oneness of Allah therefore keep focused on God. ...read more.

The fact that Allah knows what we are going to do doesn't affect our freedom of choice. However making the right choice is seen as responsibility. Man does not know what his destiny is this is why he can choose the path he will take. Sufis claim that we their instincts, our destiny is pre-decided although we don't yet know it. By believing in Al- Qadar we testify that Allah is the only true controller of the actions of his universe. It is He who decides what is good and what is bad. It is meaningless to argue whether or not human's beings have any freedom or not. We decide for ourselves what we will or wouldn't do. As said by Ghulam Sarwar 10 " we are responsible for our own actions. This freedom of action does not clash with the foreknowledge of Allah". However some people may argue that why does suffering occur? Why is there evil in the world? Why are their disabled and handicapped people in the world? . Questions like these are very difficult to answer, as we don't know the causes of them or the consequences. Allah may be testing individual's beliefs by putting them through hard times like these or keeping people in these conditions to keep the people around them safe. It is wrong to believe that lucky charms may have power to over come evil doings or they have more power then Allah, this limits the powers of God yet God is limitless, infinite. Islam refuses to accept the idea of Fatalism, which suggests that people are helpless because Allah allows humans to have conscious minds and the freedom of making choices; Muslims believe our choices will be the results on which we will face our future judgement. Allah is the almighty, Creator, all-powerful and Merciful. He did not leave humans alone at any time, instead sent down Risalah (prophets) ...read more.

people went back to their beliefs like worshiping idols/ natural elements like the sun which was created by God for the benefit of His creation instead His creation refused to accept Him and began worshipping His creations. God is the most just and will be fare to the people with good deeds by generously rewarded and warmly welcoming them into the heaven He has created. However for the people who have committed sins, they will be fairly punished and sent to h**l. All as mentioned above is the most fair and all-knowing He knows the reasons behind each persons wrongdoing and will be able to judge fairly without being biased. The Quran has much revelation, which show what the consequences of not following the Divine Guidance will be. It portrays an image of heaven as being a comfortable and a pleasant place whereas h**l is described as very hot and discomforting. The full description of heaven and h**l can be found in Surah 56 v 1-56 the Quran indicates that even if a Muslim is put into h**l they will be sent to heaven after some time. Only Allah knows the real nature of Heaven and h**l, but has describes them in the man's familiar terms in the Quran. Over all Allah is the most merciful and compassionate and all knowing. He has firstly created the earth for humanity. As He has the Ability of for knowledge He saw the need of Prophet-hood who He could send down to provide Guidance for His creation. Therefore sent down Divine Guidance through prophets and revelations setting down Rules and Guidelines for the Muslims to follow. The main message Allah sent down to each generation was His oneness and unity. Although Allah is the most powerful and can pre-destine the future He gave men kind the right to free will. However He already knew what their choice would be and has therefore created rewards and punishments, which will be revealed to them on the day of Judgement. ...read more.