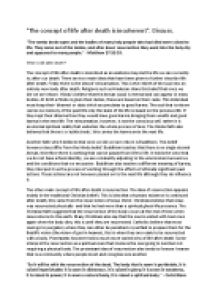 The Concept of Life After Death is Incoherent - Discuss.

﻿"The concept of life after death is incoherent". Discuss. "The tombs broke open and the bodies of many holy people who had died were raised to life. They came out of the tombs, and after Jesus' resurrection they went into the holy city and appeared to many people." - Matthew 27:52-53. What is life after death? The concept of life after death is described as an existence beyond the life we are currently in; after our death. There are two main ideas that have been given to further describe life after death. Firstly there is the idea of reincarnation. This is the rebirth of the soul into an entirely new body after death. Religions such as Hinduism share this belief that once we die we are reborn. Hindu's believe that the Atman (soul) is eternal and can appear in many bodies. At birth a Hindu is given their duties, these are based on their caste. This individual must keep their 'dharma' or duty which accumulates to good karma. The soul that is reborn carries no memory of the past life only the state of the life is based on the previous life. ...read more.

''I cannot conceive of a God who rewards and punishes his creatures, or has a will of the kind that we experience in ourselves. Neither can I nor would I want to conceive of an individual that survives his physical death; let feeble souls, from fear or absurd egoism, cherish such thoughts. I am satisfied with the mystery of the eternity of life and with the awareness and a glimpse of the marvelous structure of the existing world, together with the devoted striving to comprehend a portion, be it ever so tiny, of the Reason that manifests itself in nature.'' - Albert Einstein, The World As I See It David Hume held the argument that talking of life after death was completely meaningless. A group of philosophers named the Vienna Circle once said that language was only meaningful if there was either internal logic to support the statement or external direct sense experience to verify the statement. Internal logic means that there would be no contradictions in the argument, nothing to say logically that the argument is invalid. ''If we take in our hand any volume; of divinity or school metaphysics, for instance, let us ask, Does it contain any abstract reasoning containing quantity or number? ...read more.

If there by chance was some way of proving a disembodied existence this does not mean that there is life after death, all that it would prove is that our identity is not physical, not that there is another world where we may go after death or that our disembodied existence survives death. John Locke's argument that we would still know who we are due to our memories and experiences even if we were in another body seems to fall down on the evidence for it. There is no way of telling that we would know who we were until that actually happened, we cannot assume things that have never happened, therefore Locke's argument is weak and holds no argument for the concept of life after death. With the arguments put forward for the concept of life after death being a coherent argument, they are easily criticised, there is no proof for any argument of life after death. There are also arguments put forward by scientists that suggest that near death experiences are nothing more than a chemical reaction in the brain. This being said the concept of life after death seems to be incoherent with the arguments mentioned. It seems illogical to put forward an argument in which we must conceive another realm of existence. ...read more.