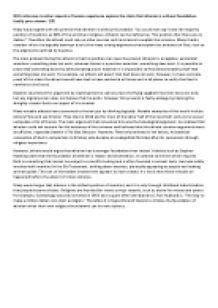 With reference to other aspects of human experience explore the claim that atheism is without foundation. Justify your answer

Transfer-Encoding: chunked ﻿With reference to other aspects of human experience explore the claim that atheism is without foundation. Justify your answer. (15) Many would agree with the premise that atheism is without foundation. You could even say it was the majority position of mankind, as 84% of the world are religious. Atheism can be defined as, ?the position that there are no deities.? Therefore the atheist must rely on other sources such as science to explain the universe. Many theists consider this to be logically bankrupt due to the many strong arguments that explain the existence of God, such as the arguments outlined by Aquinas. ...read more.

Dawkins countered this argument by claiming that he cannot prove the flying spaghetti monster does not exist, but any logical person does not believe that he exists. However this presents a faulty analogy by likening the almighty creator God to an aspect of his creation. Many notable atheists have converted to theism just by thinking logically. Notable examples of this would include Antony Flew and Lee Strobel. Flew died in 2010 and for most of the latter half of the twentieth century he was an outspoken critic of theism. The main argument that converted him was the teleological argument. He realised that atheism could not account for the existence of the universe and believed that the atheist counter-arguments were insufficient, especially Dawkin?s The God Delusion. ...read more.

God was wildly involved with mankind in the Old Testament: striking down enemies, physically appearing to people and making animals speak. This sort of immediate involvement appears to have ceased. It?s ironic that these miracles all happened before the advent of video cameras. Many would argue that atheism is the default position of mankind, and it is only through childhood indoctrination that people become theists. Religions are founded for many corrupt reasons, such as desire for money and power. For example, Scientology was only invented in 1953 and a quote often attributed to L Ron Hubbard is, ?The way to make a million dollars is to start a religion.? Therefore it is hypocritical of theists to criticise the foundation of atheism when their own religious foundations can be very dubious. ...read more.