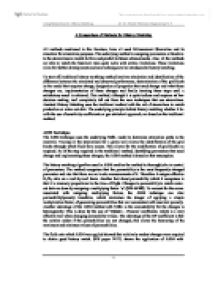 A Comparison of Methods for History Matching.

A Comparison of Methods for History Matching

All methods mentioned in this literature, have all used 3Dimensional Streamline and its simulator for simulation purposes. The underlying method is assigning parameters or function to the streamlines to match its flow and predict its future advancements. Also, all the methods are able to match the historical rates quite wells with certain limitations. These limitations allow for further developments and new techniques to be introduced to history matching.

To start off, traditional history matching method involves simulation and identification of the difference between the simulated and observed performance, determination of the grid block in the model that requires change, designation of properties that need change and what those changes are, implementation of those changes and finally iterating these steps until a satisfactory result is achieved. This method, although it is quite tedious and requires ad hoc decision making, isn’t completely left out from the new techniques that use streamlines. Assisted History Matching uses the traditional method with the aid of streamlines to match production or water-cut data. The underlying principle behind history matching whether it be with the use of sensitivity coefficients or geo-statistical approach, are based on the traditional method.

The AHM technique uses the underlying 3DSL model to determine streamline paths in the reservoir.

The method used in the SPE paper 66388, uses a black oil simulator for the purpose of history matching. The method here is a slight extension to the ‘Two-Step Inversion’ method; work performed by ‘Wang Kovscek’. The difference with this method compared to the one discussed previously is that it does not assume the fluid will be incompressible, rather it assumes compressibility and a pressure equation for it is solved. Also, a mass conservation equation is solved along each streamline that accounts for changes in pressure and total velocity.

For the example cases mentioned in SPE paper 66388 for the implementation of the black-oil model, it shows that match obtained was reasonable. The difference between this model and the pervious two is that it takes into account the effect if gravity and compressibility, which can have noticeable effects.

Forward simulations tend to ignore vital physics of the reservoir and although it may yield a good match, the predicted reservoir description may not be close to reality. Ignoring compressibility and gravity may give desired results, but future predictions will be worse than when correct physics is used. This is clearly shown in the examples used the work conducted by ‘Blunt and Agarwal’.

In traditional flow simulations, the flow is considered as a tracer, hence, tracer-like-flow assumption.

Due to the two points mentioned above the match obtained will not of a unique one. It may have a similar profile as the initial production/water-cut profile but the properties and production responses have been modified to achieve this result and may not represent the actual properties of the reservoir.

At present the method discussed in the paper have not been put into real use in industry; as the techniques are very complex and they have not been applied to many fields except for the example case, which as stated earlier has been especially chosen for that purpose and may not produce desired results for other field. The challenge is to use these techniques for applications to more field and see how effective they are.

The question that faces us now is can it be used as a routine tool? The answer if one wants can be yes. Different people will use different methods depending on the degree of accuracy wanted and how much time they are willing to spend on it. The generalised travel time inversion method is able to perform matches in a relatively short period of time with good deal of accuracy. Again, emphasis has to be placed on the matter of the methods not being tested with other wells. If the test can prove that the method(s) can work for any given field condition then it may be seen as a routine tool.