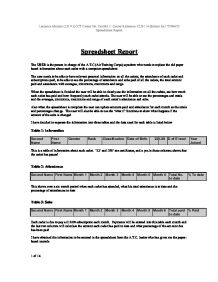 Spreadsheet Report The USER is the person in charge of the A.T.C (Air Training Corps) squadron who needs to replace the old paper based information about each cadet with a computer spreadsheet The user needs to be able to have relevant personal information on all the cadets, the attendance of each cadet and subscriptions paid, to be able to see the percentage of attendance and subs paid of all the cadets, the total amount paid and attendance with averages, minimums, maximums and range. When the spreadsheet is finished the user will be able to clearly see the information on all the cadets, see how much each cadet has paid and how frequently each cadet attends. The user will be able to see the percentages and totals and the averages, minimums, maximums and range of each cadet's attendance and subs. Also when the spreadsheet is complete the user can update amounts paid and attendance for each month so the totals and percentages change. The user will also be able to use the 'what if' functions to show what happens if the amount of the subs is changed I have decided to separate the information into three tables and the data need for each table is listed below Table 1: Information Second Name First Name Gender Rank Classification Date of Birth 22 L98 D of E level Year Joined This is a table of information about each cadet. ...read more.

This formula takes the total attendance to date from cell I3, then divides it by the number of cells in that row which have a value entered into it. So after two months the total attendance will be divided by two, after three months it will be divided by three and so on. Column I shows the the number of months to date that each cadet has attended. I have entered the function =SUM(A3:H3) into cell I3 then copied this formula into the cells below it as before. This function gives the total of all the values in the range of cells from A3 to H3 To enter the function, click on the Paste button on the standard toolbar : Then select from the Function name box : I have used the Average function =AVERAGE(I3:I18) to give the average attendance for all cadets. I typed the function into the cell where I wanted the answer to appear. I did this so I could see how much each cadet was attending compared with the average for the squadron. I did this for both the total and percentage columns. I have used the Maximum function =MAX(I3:I18) to show the highest attendance and the Minimum function =MIN(I3:I18) to show the lowest attendance. ...read more.