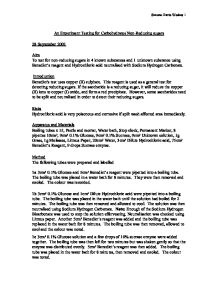 Although this was hard to see due to the chlorophyll. However the grass had to be broken down by the hydrochloric acid before a red precipitate was formed. Procedure c has shown that grass does contain some sucrose as a red precipitate was formed when sucrase was added. Molasses, also called treacle, dark brown viscous liquid obtained as a by-product in the processing of [1]sugar, especially cane sugar. Molasses contains uncrystallized sugar and some [2]sucrose. Therefore, molasses contained some monosaccharides that is why an orange precipitate was formed when Benedict's reagent was added. Regular molasses (treacle) is an inverted sugar produced from the residue of refinement. Dark brown sugar has more colour and a stronger molasses flavour than light brown sugar. The acid treatment darkens it. Molasses is filtered and may have a sulphur compound added to sterilize and stabilize it. Therefore in procedure b the intensity of the molasses was increased. It would not have been broken down to produce reducing sugars. Another suggestion is that as the molasses is stabilized it will be very hard to breakdown so maybe a stronger form of Hydrochloric acid needs to be used. However in procedure c there was an orange precipitate after Benedict's reagent was used. So molasses also contain some sucrose. ...read more.