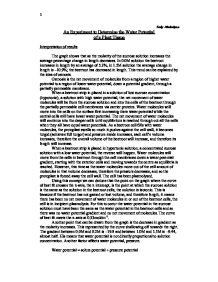 An Experiment to Determine the Water Potential of a Plant Tissue

Toby Nicholson An Experiment to Determine the Water Potential of a Plant Tissue Interpretation of results The graph shows that as the molarity of the sucrose solution increases the average percentage change in length decreases. In 0.0M solution the beetroot increases in length by an average of 5.3%, in 1.5M solution the average change in length is -10.9%; the beetroot has decreased in length. This trend can be explained by the idea of osmosis. Osmosis is the net movement of molecules from a region of higher water potential to a region of lower water potential, down a potential gradient, through a partially permeable membrane. When a beetroot strip in placed in a solution of low sucrose concentration (hypotonic), a solution with high water potential, the net movement of water molecules will be from the sucrose solution and into the cells of the beetroot through the partially permeable cell membranes via carrier proteins. Water molecules will move into the cells on the surface first increasing there water potential while the central cells still have lower water potential. The net movement of water molecules will continue into the deeper cells until equilibrium is reached through out all the cells when they all have equal water potentials. As a beetroot cell fills with water molecules, the protoplast swells so much it pushes against the cell wall, it becomes turgid (achieves full turgor) ...read more.

The molecules collide more often inside the cell so have more kinetic energy; therefore this increases the chance of water molecule hitting the cell membrane with enough energy to escape. This increases the water potential within the cell and reduces the net movement of water molecules into the cell. So we can say increasing pressure increases water potential. Conversely in hypertonic solutions, as water molecules leave the cell the pressure potential stays at zero. In conclusion, the average solution within the beetroot cells is 0.33 moldm-3. The general trend, that as molarity of sucrose solution increases average percentage change in length decreases, is described by osmosis. Also the reason the gradient decreases as molarity increases is due to increased pressure potential within a cell when it becomes turgid, which increases water potential. Evaluation The results obtained fell on or near to the curve of best fit on the graph except for the result obtained for 0.3moldm-3 sucrose solution, which was a higher value than the one before. This goes against the science outlined earlier. Therefore we can say this result is anomalous and has been circled on the graph. There are a number of reasons for this A large source of error within the experiment is the cutting of the beetroot strips. Due to the difficultly of cutting rectangular strips by hand with a scalpel not all the sides will be at 900. ...read more.

As well as measurements at more moralities, perhaps every 0.05 moldm-3, would have allow a more accurate curve to be plotted as there would have been more points. If the sucrose solution had not been shaken thoroughly enough the sucrose may not have dissolved completely and the molarity would have been different to what it was labelled. This would have cause inaccuracy. This is unlikely to have happen if the procedure was carried out well. A large potential source of error was due to that fact that the cells within beetroot have very varied water potentials because of the different amounts of salts and sugars in there vacuoles. This means not all of the strips would have had the same water potential so this varies the results and places another limit on the results. A different experiment would be to use the same procedure used above but use a pan balance and measure mass to 3 decimal places. This would create much less percentage error than measuring length. Another way off measuring the mean molarity concentration of cell sap within beetroot cells is to cut 'chips' of beetroot. Each one should be 5�5mm and less than 0.5mm thick. Place three chips into different molarity solutions and leave for about 30minutes. Then remove and using a microscope count to amount of plasmolysed cells per 200 cells. The molarity at which 50% of the cells are plasmolysed is the molarity within the cells. 1 ...read more.