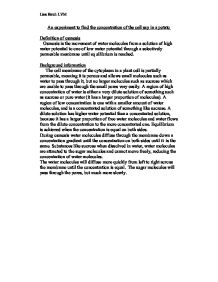 An experiment to find the concentration of the cell sap in a potato.

I took 3 test tubes and filled one with distilled water, one with weak sugar solution (o.3 M) and the last with a strong sugar solution (1 M). I placed one chip in each test tube and left the apparatus for 30 minutes. After 30 minutes I took the chips out of the test tubes and dried them on paper towels, I then recorded the mass and length again. Test tube Original length of chip (cm) Original mass of chip (g) Final length of chip (cm) Final mass of chip 5.0(g) Change in mass of chip (cm) Change in length of chip (cm) 0 M 5.3 4.8 5.5 6.4 +0.2 +0.2 0.3 M 4.9 6.5 4.8 4.6 -0.1 -0.1 1 M 4.8 5.2 5.0 -0.2 -0.6 My pilot study proved that when the potato is left in a solution of a lower concentration the potato chip increased in mass but if the surrounding solution has a lower concentration it decreases. This pilot study helped me decide not to measure the lengths of the potato chips but to concentrate on the mass because it is easier to distinguish the change and will give me hopefully more accurate results. To find the concentration of the cell sap I need to find the concentration of the surrounding solution when there is no change in the mass of potato so equilibrium is achieved. ...read more.

The cells in the potato became flaccid as water had diffused out by osmosis, and lost mass making the chips lighter. AS the Molar of the concentration got higher the potato cells lost more mass, as my graph shows a negative correlation. As the points are close to a straight line it shows that the results are proportional to each other. According to my graph the concentration of cell sap was 0.135, as this was where it crossed the x-axis. This means that the concentrations were already at equilibrium , so there was no net movement of water molecules. Water molecules were passing in and out of the cells but in equal amounts, so the chip did not increase or decrease in mass. My predictions were close to being right, but the actual results were probably different because I was more accurate because I tested more solutions than in my pilot study. Introduction I will be using osmosis to find the concentration of cell sap in a potato cell. From previous research I know that by the process of osmosis the water will travel into the cells making them swell and become turgid . therefore increasing the mass of the potato chip. I will know the concentration of the cell sap when there is no movement between the cells, which I will be able to tell because there will be no change in the potatoes mass. At this point the solution of sug Lisa Birch LVM ...read more.