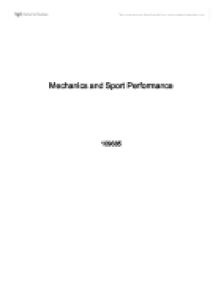 The aim of this assessment is to analysis the long jump technique by applying the following kinetic and kinematics principles: force, inertia, momentum, friction, Newton’s Laws, free body force diagrams and impulse-momentum relationships which underpin the mechanics of sport.

The long jump is a speed event which comprises of four phases: approach run, take off, flight through the air, landing.  To achieve maximum distance in the long jump the athlete will have to balance three components - speed, technique and strength (Carr 1999).

The approach phase of the long jump as stated by Hays (1993) is to get the athlete up to the optimum position for take off with as much speed as the athlete can control during this part of the jump so the rhythm in the approach run is important to ensure the ideal speed is achieved at take off and also accuracy in hitting the take off board.  The generation of the forward motion is created by a ground reaction force where the earths force is responding to the athletes backwards thrust against the earths surface (Carr 1997).  The ground reaction force R is equal in action line and magnitude to the downwards thrust of the foot during running but in the opposite direction.

F being the force acting on the body which equals the rate of change (d/dt) of momentum (mv) (Bartlett 1997).  The equation below shows that mass times acceleration has a relation to force

The two equations can be rearranged to show the impulse-momentum relationship (Bartlett 1997).

The impulse is evaluated by numerical/graphical integration, which can be performed from a force-time record obtained from a force platform (Carr 1997).  If the mass is constant the equation can be, F∆t = m∆v, where F is the mean value of the force acting during a time interval ∆t during which the velocity of the object changes by ∆v (Bartlett 1997).  The change in vertical lift of the jumper from the horizontal velocity depends on the impulse of the force exerted by the foot off the board and inversely proportional to the mass of the jumper.

From the take off phase the main objective in the flight of the technique is to undertake the optimum body position for landing (Hays 1993).  However the take off foot pushing back on the board causes the body to rotate forwards which will continue until a something has acted against it to stop the rotation (Carr 1997).  The speed of rotation is controlled by the body’s moment of inertia.  So this usually provides the performer with two main techniques to choose from: the hang (figure 3)

The last phase to complete the long jump is the landing, it’s critical to get those vital centimetres to land right.  A maximum jump is obtained when the heels touchdown at the point where the centre of gravity of the body would have landed (Wirhed 1996) (figure 6).  If the heel strike is too far in front the athlete will fall backwards and if they touch sooner then the athlete will roll forwards.  Figure 7 shows the action and reaction of the landing.  Carr (1997) expresses the magnitude of the earth’s reaction force pushing against the athlete depends on how much force the athlete is pushing against the sand which acts as a shock absorber to break down the force. 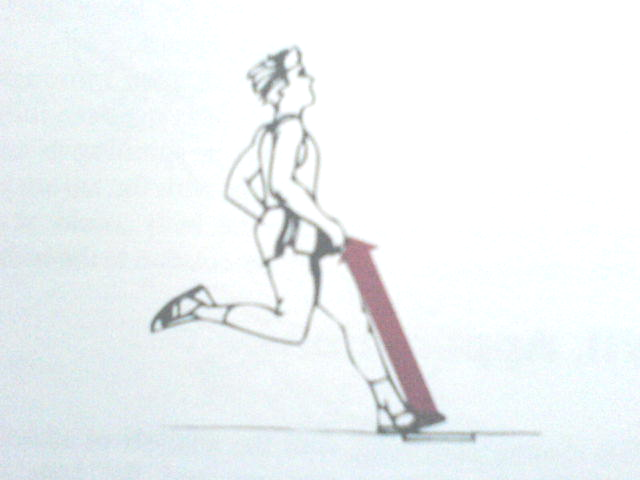 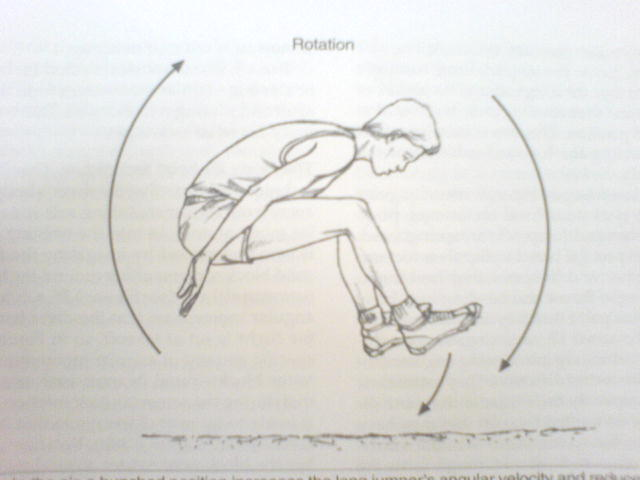 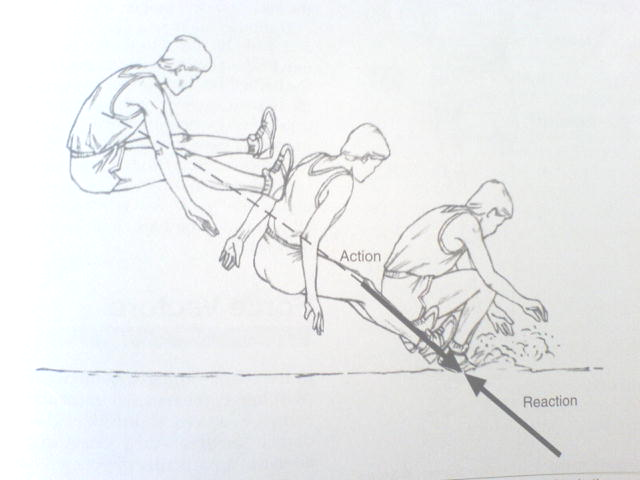 Figure 7 – Action and reaction of the landing