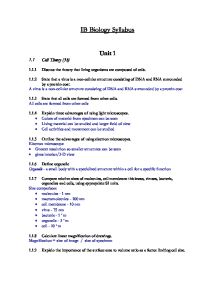 Cell Theory - Discuss the theory that living organisms are composed of cells.