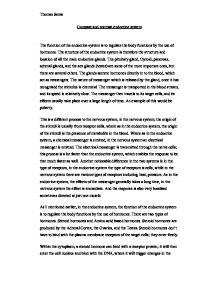 Compare and contrast endocrine system The function of the endocrine system is to regulate the body functions by the use of hormones. The structure of the endocrine system is therefore the structure and location of all the main endocrine glands. The pituitary gland, thyroid, pancreas, adrenal glands, and the sex glands (testes) are some of the more important ones, but there are several others. The glands secrete hormones directly in to the blood, which act as messengers. The nature of messenger which is released by the gland, once it has recognised the stimulus is chemical. The messenger is transported in the blood stream, and its speed is relatively slow. ...read more.

Peptide hormones must send their message from outside the target cell (a two messenger system is commonly required for the action of most of these hormones) Peptide hormones attach to receptors on the plasma membrane, the first messenger carrying the message from the endocrine Gland to the Cell Surface, passes the message to another molecule inside the cytoplasm. Meanwhile the second messenger (the hormone-receptor complex) indirectly activates an enzyme that converts molecules of ATP to cyclic AMP inside the target Cell. Cyclic AMP acts as a second messenger by indirectly activating other enzymes and proteins in the target cell. Therefore the AMP initiates a chain of biochemical events that leads to functional changes within the target cell. A single hormone molecule binding to a receptor in the plasma membrane can result in the formation of many Second Messengers. ?? ?? ?? ?? Thomas Jamie ...read more.