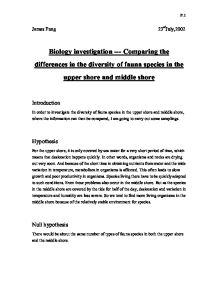 James Fung 23rdJuly,2002 Biology investigation --- Comparing the differences in the diversity of fauna species in the upper shore and middle shore Introduction In order to investigate the diversity of fauna species in the upper shore and middle shore, where the information can then be compared, I am going to carry out some samplings. Hypothesis For the upper shore, it is only covered by sea water for a very short period of time, which means that desiccation happens quickly. In other words, organisms and rocks are drying out very soon. And because of the short time in obtaining nutrients from water and the wide variation in temperature, metabolism in organisms is affected. This often leads to slow growth and poor productivity in organisms. Species living there have to be quickly adapted to such conditions. Even these problems also occur in the middle shore. But as the species in the middle shore are covered by the tide for half of the day, desiccation and variation in temperature and humidity are less severe. So we tend to find more living organisms in the middle shore because of the relatively stable environment for species. ...read more.

Evaluation When I come to evaluating evidence and procedure, I found out that t have come across a few problems or limitations and they could have affected the result I obtained. They are: 1) There are lots of rocky pools in the area, so sometimes I have had to reject some particular points chosen by random number table. This made my results not completely random. 2) Places that I have chosen in both shores were a bit lower than the rest of the corresponding shores, which means there were rather lots of seaweed covering the rocks than usual. And this made it hard for me to count the types and number of species in each quadrat. 3) I have move further left for the middle shore compare to the upper shore because of the place being occupied by the others. This might have slight effect on my results as the environment changed a little bit. 4) It was hard to define organisms. e.g. there are four types of periwinkle and some of them are quite similar and this could have affected the diversity index that I got. Overall there are no anomalies in results. End P.1 ...read more.