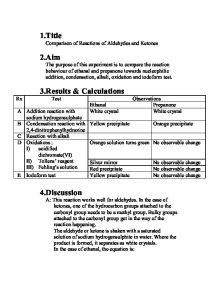 Comparison of Reactions of Aldehydes and Ketones

1. Title Comparison of Reactions of Aldehydes and Ketones 2. Aim The purpose of this experiment is to compare the reaction behaviour of ethanal and propanone towards nucleophilic addition, condensation, alkali, oxidation and iodoform test. 3. Results & Calculations Rx Test Observations Ethanal Propanone A Addition reaction with sodium hydrogensulphate White crystal White crystal B Condensation reaction with 2,4-dinitrophenylhydrazine Yellow precipitate Orange precipitate C Reaction with alkali D Oxidations : I) acidified dichromate(VI) II) Tollens' reagent III) Fehling's solution Orange solution turns green No observable change Silver mirror No observable change Red precipitate No observable change E Iodoform test Yellow precipitate No observable change 4. Discussion A: This reaction works well for aldehydes. In the case of ketones, one of the hydrocarbon groups attached to the carbonyl group needs to be a methyl group. Bulky groups attached to the carbonyl group get in the way of the reaction happening. The aldehyde or ketone is shaken with a saturated solution of sodium hydrogensulphite in water. Where the product is formed, it separates as white crystals. ...read more.

till it forms precipitate and NH4OH was added till the precipitate is disssoved so thus formed mixture is known as Tollens' reagent. Once it has been identified that there is a carbonyl group on the organic molecule using 2,4-dinitrophenylhydrazine(also known as Brady's reagent or 2,4-DNPH), Tollens' reagent can be used to ascertain whether the compound is a ketone or aldehyde. Importantly, there is a special case in which Tollens' Reagent will give a positive for a ketone. If the ketone is an alpha-hydroxy ketone, then the Tollens' reagent will react. When adding the aldehyde or ketone to Tollens' reagent, the teat tube is put in a warm water bath. If the reactant under test is an aldehyde, Tollens' test results in a silver mirror. If the reactant is a ketone, it will not react because a ketone cannot be oxidized easily. A ketone has no available hydrogen atom on the carbonyl carbon that can be oxidized - unlike an aldehyde, which has this hydrogen atom. The reagent should be freshly prepared and stored refrigerated in a dark glass container. ...read more.

RCOOH + -CX3 � RCOO- + CHX3 5. Answers to Question 5.1Describe how Tollens' reagent can be prepared. Write a balanced chemical question for the reaction between Tollens' reagent and ethanal. Tollens' reagent needs to be prepared fresh by adding a drop of dilute sodium hydroxide to aqueous silver nitrate to give a brown precipitate of silver oxide. The precipitate is dissolved by adding concentrated ammonia to give the reagent, [Ag(NH3)2]NO3 (aq): 5.2Consider the mechanism of nucleophilic addition reaction to unsaturated carbonyl group, predict and explain the relative reactivity of ethanal and propanone. Reactivity of the ethanal is higher than that of propanone. Unlike the non-polar and electron rich carbon double bond, C=O double bond has a positive centre and undergoes nucleophilic addition. More positive on carbon, so it is more vulnerable to nucleophilic attack. Ethanal is more reactive than propanone since electron donating group of R makes the carbon in C=O in propanone less positive, less attractive to the nucleophile. Moreover, steric hindrance of two bulky R groups in propanone prevents the attack of the nucleophile on C=O 6. Conclusion Ethanal is more reactive than propanone in the following chemical reaction such as nucleophilic addition, condensation, alkali, oxidation and iodoform test. ...read more.