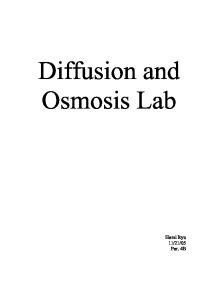 Diffusion and Osmosis Lab Hemi Ryu 11/21/05 Per. 4B Background Information: All atoms and molecules possess kinetic energy due to their constant motion. Diffusion is the movement of molecules from an area of higher concentration to an area of lower concentration and is caused by the atoms' kinetic energy. Osmosis is the diffusion of water through a selectively permeable membrane, a membrane that allows the diffusion of only selected solutes and water. During osmosis, water moves from a region of higher water potential to a region of lower water potential until equilibrium is reached. Water potential is the measure of free energy of water in a solution. Cells have ways to move ions or molecules incapable of diffusion and osmosis into and out of themselves. This process is called active transport, where carrier proteins use energy from ATP to move substances across the cell membrane against a concentration gradient, from a region of lower concentration to a region of higher concentration. Two solutions are either hypertonic, hypotonic, or isotonic to each other. Hypertonic describes a solution that has a higher solute concentration than another solution. Hypotonic describes a solution that has a lower solute concentration than another solution. Isotonic is used to describe solutions with equal solute concentrations. Experiment 1: Diffusion Hypothesis: If a semi-permeable bag filled with glucose and starch solution is placed in a beaker of distilled water, then the glucose and starch will ...read more.