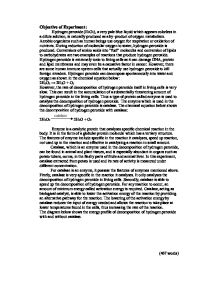 Effect of Concentration of Enzyme on the Rate of Reaction