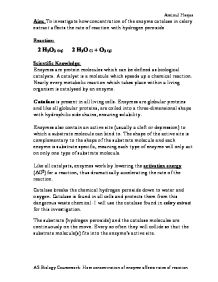 Aim: To investigate how concentration of the enzyme catalase in celery extract affects the rate of reaction with hydrogen peroxide Reaction: 2 H2O2 (aq) --> 2 H2O (l) + O2 (g) Scientific Knowledge: Enzymes are protein molecules which can be defined as biological catalysts. A catalyst is a molecule which speeds up a chemical reaction. Nearly every metabolic reaction which takes place within a living organism is catalysed by an enzyme. Catalase is present in all living cells. Enzymes are globular proteins and like all globular proteins, are coiled into a three-dimensional shape with hydrophilic side chains, ensuring solubility. Enzymes also contain an active site (usually a cleft or depression) to which a substrate molecule can bind to. The shape of the active site is complementary to the shape of the substrate molecule and each enzyme is substrate specific, meaning each type of enzyme will only act on only one type of substrate molecule. Like all catalysts, enzymes work by lowering the activation energy (?G�) for a reaction, thus dramatically accelerating the rate of the reaction. Catalase breaks the chemical hydrogen peroxide down to water and oxygen. Catalase is found in all cells and protects them from this dangerous waste chemical. I will use the catalase found in celery extract for this investigation. The substrate (hydrogen peroxide) and the catalase molecules are continuously on the move. Every so often they will collide so that the substrate molecule(s) fits into the enzyme's active site. Material from - http://s-cool.co.uk; Material from - http://s-cool.co.uk How the enzymes work can be explained using the "lock and key" hypothesis, substrate approaches the active site and fits exactly in to it. No other types of substrate have this ability. Products are formed as a result. The enzyme is ready to be used in another reaction. Each type of enzyme has its own specific optimum conditions under which it works best. ...read more.

(effectively 20%, 40%, 60%, 80% and 100%) Fig 1.1 - Table to show percentage of celery concentrations Celery extract / % Distilled water / ml Celery extract / ml 100 0 10 80 2 8 60 4 6 40 6 4 20 8 2 I experimented with both the concentrations of the celery extract and hydrogen peroxide. I aimed to get a relatively high amount of oxygen released at 100% concentration of celery extract. Method: I will carry out an experiment using the apparatus shown below. It will be setup as below: * Set up the clamp, boss and stand, placing the test tube and gas syringe firmly in the clamp * Place a rubber bung with tubing on the head of the test tube and connect to the gas syringe * Check for any air locks * Measure the amount of celery extract needed (15ml) * Measure the volume of hydrogen peroxide * Load the separate syringes with their separate solutions and place the celery extract solution in the test tube + add a few drops of pH buffer * Hold the syringe firmly and press the stopwatch as soon as the hydrogen peroxide is injected and reacts with the celery extract. * Record the volume of gas produced after every 30 seconds for a total of 180 seconds Due to measurements being made to one decimal place, my mean value of the amount of oxygen produced shall also be to one decimal place. I shall repeat the experiment three times each for each concentration and take the mean average value. To get this, I add all the values up and divide by how many there are, in this case, three. Taking averages ensures reliability, depending on how close your results are. The gas syringe allows me to record data at a high level of precision, to 0.5cm�. As a result, my experiment will be more accurate. ...read more.

mixing will result in a lower rate of reaction Use a mechanical mixer which will stir the solution equally Equal spread of enzyme molecules makes for a more accurate experiment There was an extraneous factor which could have influenced the reaction which was the temperature. Although the experiment was done in same day, the temperature was not exactly constant throughout. An increase in temperature results in increase in rate of reaction, due to more kinetic energy present, collisions are more frequent. Decrease in temperature will have the opposite effect and cause a decrease in rate of reaction. An improvement would be to use a water bath, where temperature can be maintained at a constant level. This way, results will not be subject to changes in temperature, and more accurate results can be achieved. Major sources of error: Perhaps the most major source of error was the gas syringe sticking. Especially after the 100% concentration when there was an overflow of reacted solution into the gas syringe via the rubber tubing. The gas syringe was dried vigorously using tissue and a hairdryer. It was a relatively lengthy process in an attempt to reduce possible errors in readings but I still believe this was the cause of most inaccuracies compounded in this experiment. Validity of results: The results of my experiment and the graph it produced, in comparison to standardised textbook graphs, shows my experiment was valid enough. Despite sources of error, which were relatively small, accuracy was maintained at a maximum level achievable in a classroom, as it was possible to control most of the variables. Reliability of results: As the experiment was repeated 3 times for each concentration, I would consider the results reliable. A mean average was taken of the three results for each concentration, of which in general, was not more than 2.0cm� within each other. To achieve this consistency implies reliability. Only one possible anomalous result was obtained. Aminul Hoque AS Biology Coursework: How concentration of enzyme affects rates of reaction ...read more.