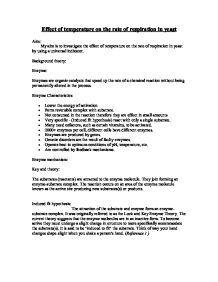 effect of temperature on the rate of respiration in yeast

Effect of temperature on the rate of respiration in yeast Aim: My aim is to investigate the effect of temperature on the rate of respiration in yeast by using a universal indicator. Background theory: Enzyme: Enzymes are organic catalysts that speed up the rate of a chemical reaction without being permanently altered in the process. Enzyme Characteristics * Lower the energy of activation * Form reversible complex with substrate. * Not consumed in the reaction therefore they are effect in small amounts * Very specific - (Induced fit hypothesis) react with only a single substrate. * Many need cofactors, such as certain vitamins, to be activated. * 2000+ enzymes per cell, different cells have different enzymes. * Enzymes are produced by genes. * Genetic disorders are the result of faulty enzymes. * Operate best in optimum conditions of pH, temperature, etc. * Are controlled by feedback mechanisms. Enzyme mechanism: Key and theory: The substrates (reactants) are attracted to the enzyme molecule. They join forming an enzyme-substrate complex. The reaction occurs on an area of the enzyme molecule known as the active site producing new substrates(s) or products. Induced fit hypothesis: The attraction of the substrate and enzyme form an enzyme-substrate complex. It was originally referred to as the Lock and Key Enzyme Theory. The current theory suggests that the enzyme molecules are in an inactive form. To become active they must undergo a slight change in structure to more specifically accommodate the substrate(s). It is said to be "induced to fit" the substrate. Think of way your hand changes shape slight when you shake a person's hand. (Reference 1 ) Factors affecting rate of reaction: Effect of temperature on enzyme: As the temperature increase in an enzyme catalyzed reaction the rate of reaction also increases. A ten degree Centigrade rise in temperature will increase the activity of most enzymes by 50 to 100%. ...read more.

This protein channel is often referred to as a stalked particle that has a region called ATP synthase, which acts an enzyme. As the hydrogen ions pass through the channel their electrical potential energy is used to synthesise ATP. (Reference 11) Methylene blue: Methylene blue is a heterocyclic aromatic chemical compound with molecular formula: C16H18ClN3S. Methylene blue is widely used as a redox indicator in analytical chemistry. Solutions of this substance are blue when in an oxidizing environment, but will turn colorless if exposed to a reducing agent. The redox properties can be seen in a classical demonstration of chemical kinetics in general chemistry, the "blue bottle" experiment. Typically, a solution is made of dextrose, methylene blue, and sodium hydroxide. Upon shaking the bottle, oxygen oxidizes methylene blue, and the solution turns blue. The dextrose will gradually reduce the methylene blue to its colorless, reduced form. Hence, when the dissolved oxygen is entirely consumed, the solution will turn colorless. Methylene blue is also used to make the reaction between Fehling's solution and reducing sugars more visible. Methylene blue will make the yeast suspension blue and then started to get colourless or back to yeast colour depending on how high the temperature is. (Reference 12) Alcohol fermentation: Alcohol fermentation starts off in glycolysis with breaking down glucose which is 6 carbon molecules into a 3 carbon molecule called pyruvic acid. This pyruvic acid is then converted to CO2, ethanol, and energy for the cell. Humans have long taken advantage of this process in making bread, beer, and wine. In these three products the same microorganism is used: the common yeast or Saccharomyces Cerevisae. Lactic acid fermentation is caused by some fungi and bacteria. The most important lactic acid producing bacteria is Lactobacillus. The presence of lactic acid, produced during the lactic acid fermentation is responsible for the sour taste and for the improved microbiological stability and safety of the food. ...read more.

Also if the volume is not same in each repetition this will not show a fair test and shoes inconsistency and inaccurate, which can lead to unreliable results. Therefore I will use precise syringes 10ml syringe for 10ml of live yeast and 1.0ml syringe for 0.5ml of methylene blue. Using precise instrument will help me increase the precision of my results. When I am reading my thermometer to check the temperature I will come down on scale with an eye level to the thermometer because changes in temperature and not reading it accurately can affect rate of respiration which can lead to unreliable results. The starting and the end point of respiration of yeast will also depend on time of starting and ending the clock. Therefore I will keep the clock close to me so I start and end immediately so the yeast doesn't get more respire. It will make my results more accurate. I will use digital clock rather than an analogue one because this will increase precision as digital one is significantly better. It is harder to read off the seconds in analogue one. By using a digital watch this will make my results more reliable. I will use clean test tube so there is any extra yeast on the sides of the test tube which then can be mixed with the live and gets contamination which will give me unreliable results. So I will use clean and dry test tubes because there also can be a contamination with water. I will continuously be using stirring rod and keep mixing the yeast before my experiments because by not mixing the yeast so the solution does not go to the bottom and when I collect it with the syringe I get the equal amount. This will increase accuracy of my results. I have used test tubes other then boiling tubes because boiling tubes have larger surface area and the colour change is slightly slower because the reaction doesn't heat up as quicker due to larger surface area than in test tube where they have slightly smaller surface area. ...read more.

*****
A well planned, conducted and written up investigation. A high standard of A level knowledge demonstrated.