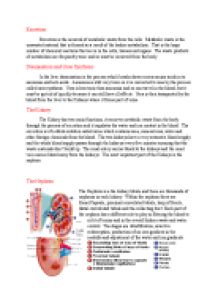 Excretion and the functioning of the kidneys

﻿Excretion Excretion is the removal of metabolic waste from the cells. Metabolic waste is the unwanted material that is formed as a result of the bodies metabolism. That is the large number of chemical reactions that occur in the cells, tissues and organs. The waste products of metabolism are frequently toxic and so must be removed from the body. Deamination and Urea Synthesis In the liver deamination is the process which breaks down excess amino acids in to ammonia and keto acids. Ammonia is still very toxic so it is converted to urea by the process called urea synthesis. Urea is less toxic than ammonia and so can travel in the blood, but it must be got rid of quickly because it can still have ill effects. ...read more.

The most important part of the Kidneys is the nephron. The Nephron The Nephron is a the kidney tubule and there are thousands of nephrons in each kidney. Within the nephron there are: Renal Capsule, proximal convoluted tubule, loop of Henle, distal convoluted tubule and the collecting duct. Each part of the nephron has a different role to play in filtering the blood to rid it of toxins and in the overall kidney waste and water control. The stages are ultrafiltration, selective reabsorption, production of an iron gradient in the medulla and adjustment of the water and ion gradients. Ultrafiltration Ultrafiltration occurs in the renal or bowman's capsule. The renal artery which brings blood to the kidney is split up into numerous arterioles, each feeding a nephron. ...read more.

Small proteins are reabsorbed. 80% of water is absorbed back into the blood by osmosis. The proximal convulated tubule cells have many mitochondria to provide ATP for active transport and mirovilli to increase surface area for absorption. Loop of Henle The loop of henle creates the conditions for the final reabsorption of water in the collecting duct by creating an ion gradient. In the loop of henle salt is added to the filtrate in the descending limb. The cells surrounding are impermeable to ions. Due to water moving from a less negative to a more negative water potential, water comes into the filtrate. In the ascending limb the walls are impermeable to water so the water remains and the ions leave creating an ion gradient in the medulla. ...read more.