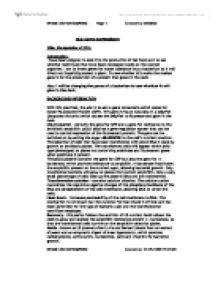 18.3: GENE EXPRESSION Title: Manipulation of DNA Introduction: I have been assigned to look into the production of GM foods and to see whether techniques that have been developed works on the wanted organism. I am to insert genes for water tolerance into a bacterium so it will infect and hopefully protect a plant. To see whether this works the marker gene is for the production of a protein that glows in the dark Aim: I will be changing the genes of a bacterium to see whether it will glow in the dark. BACKGROUND INFORMATION With this practical, the aim is to add a gene to bacteria which codes for Green Fluorescent Protein (GFP). This gene is found naturally in a jellyfish (Aequorea victoria) which causes the jellyfish to fluoresce and glow in the dark. pGLO plasmid - contains the gene for GFP and a gene for resistance to the antibiotic ampicillin. pGLO also has a gene regulation system that can be used to control expression of the fluorescent protein. The gene can be switched on by adding the sugar ARABINOSE to the cell's nutrient medium. The selection of cells that have been transformed with pGLO DNA is done by growth on antibiotic plates. The transformed cells will appear white (wild type phenotype) on plates not containing arabinose and fluorescent green when arabinose is present. The pGLO plasmid contains the gene for GFP but also the gene for �-lactamase, which provides resistance to ampicillin. ...read more.

(D18.3) Distinction between prokaryotes and eukaryotes Eukaryotic cell have true nucleus and reflects the fact that these cells have clearly visible nucleus. In contrast, prokaryotic cells have no nucleus; instead they have a long compacted strand of DNA in the middle of cells. There is more significant difference apart from the absence and presence of nucleus; eukaryotic cells have full complete membrane-bound organelles in their cytoplasm, whereas prokaryotes lack detail. Prokaryotic cell Bacterium illustrates the main features of a prokaryotic cell. The cell is filed with cytoplasm but lacks a detailed nucleus, instead, it has a long strand of DNA, each ends joining to form a ring. This is sometimes referred as the bacterial chromosome; prokaryotic chromosome is much simpler than eukaryotic chromosome. The DNA is mainly positioned at certain areas of the cell and is called nucleotide. The nucleotide is protected by the cell wall or cell membrane. Furthermore, there may be smaller rings of DNA called plasmids which act as additional chromosome. Bacteria cells are lined with plasma membranes which are much smaller in detail than eukaryotic cells. Prokaryotes are asexual meaning that their offspring's have identical characteristics of the parent cell. When prokaryotic cell divides, the DNA replicates and the two strands move into the new cells without going through the process of meiosis or mitosis, however, eukaryotes go through meiosis, the process involving the division of the chromosomes and the division of the nucleus and cells and mitosis where the cell division of a single parent results into two identical daughters. By using prokaryotes scientist can easily extract the DNA from cells and insert them into organism and even change their characteristics. ...read more.