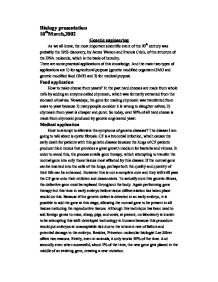 Biology presentation 10thMarch,2002 Genetic engineering As we all knew, the most important scientific event of the 20th century was probably the 1953 discovery, by James Watson and Francis Crick, of the structure of the DNA molecule, which is the basis of heredity. There are some practical applications of this knowledge. And the main two types of applications are 1) for agricultural purpose (genetic modified organism GMO and genetic modified food GMF) and 2) for medical purpose. Food application How to make cheese from yeasts? In the past hard cheeses are made from whole milk by adding an enzyme called chymosin, which was formerly extracted from the stomach of calves. Nowadays, the gene for making chymosin was transferred from cows to yeast because 1) ...read more.

However this is not a complete cure and they will still pass the CF gene onto their children and descendants. To actually cure this genetic illness, the defective gene must be replaced throughout the body. Again performing gene therapy but this time in early embryo before tissue differentiation has taken place would do this. Because if the genetic defect is detected in an early embryo, it is possible to add the gene at this stage, allowing the normal gene to be present in all tissues including the reproductive tissues. Although this technique has been used to add foreign genes to mice, sheep, pigs, and cows, at present, no laboratory is known to be attempting this well-developed technology in humans because this procedure would put embryos at unacceptable risk due to the inherent rate of failure and potential damage to the embryo. ...read more.

and iron (leading to anaemia). Two genetic engineers have transferred the genes for vitamin A from other species into rice, creating a strain of rice, which is rich in vitamin A. The amount of rice in a typical third world diet could provide about 15% of the recommended daily allowance of vitamin A, sufficient to prevent blindness. Genetic engineers also intend to produce a rice variety rich in iron. But this is a more difficult problem than increasing rice's vitamin A content because rice contains an enzyme called phytase. And this enzyme prevents the body from absorbing iron. Because rice plants cannot reproduce without adequate phytase in the grains, so it does little good to breed for increased iron content. People do hope to be able to find a gene coding for a protein that will break down phytase when the rice is cooked. ...read more.