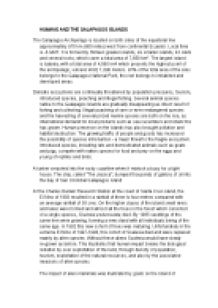 Humans and the Galapogas Islands

ï»¿HUMANS AND THE GALAPAGOS ISLANDS The Galapagos Archipelago is located on both sides of the equatorial line approximately 970 km (600 miles) west from continental Ecuador. Local time is -6 GMT. It is formed by thirteen greater islands, six smaller islands, 42 islets and several rocks, which cover a total area of 7,850 km². The largest island is Isabela, with a total area of 4,590 km² which presents the highest point of the archipelago, volcano Wolf, 1,690 meters. 97% of the total area of the isles belongs to the Galapagos National Park, the rest belongs to inhabited and developed areas. Delicate ecosystems are continually threatened by population pressures, tourism, introduced species, poaching and illegal fishing. Several animal species native to the Galapagos Islands are gradually disappearing as direct result of fishing and collecting. Illegal poaching of rare or even endangered species and the harvesting of several prized marine species are both on the rise, as international demand for local products such as sea cucumbers and shark fins has grown. ...read more.

The impact of alien mammals was illustrated by goats on the Island of Santiago. Some initially released in 1833 probably died out, but a further release of goats and some pigs in 1917 were so successful that by the 1970s up to 100,000 goats were roaming the island. They devastated the flora while at the same time allowing two alien herbs, which the goats do not like, to flourish. In 1972 there was still some wooded vegetation but by 2003 there was mainly grassland. A programme to eradicate all the goats and pigs on Santiago and Northern Isabela was undertaken and completed by 2006. On Pinta Island where one male and two female goats were introduced in 1959, by 1974 there were about 30,000 of them. These were eradicated and resulted in the start of such tremendous plant growth that it is now considered that some balance needs to be reached by an herbivorous species. ...read more.

The Foundation is part of a network of local and national organizations supporting Galapagos Island protection. For fifty years, CDF has worked closely with the Galapagos National Park Service (GNPS), the main government authority overseeing the safeguarding of the islands? natural resources, providing the results of scientific research to conserve this living laboratory. CDF?s mission is to provide knowledge and assistance through scientific research and complementary action to ensure the conservation of the environment and biodiversity in the Galapagos Archipelago. Within this context, the vision of the CDF for 2016 is to be the world's leading research institution dedicated to the conservation of the biological diversity and natural resources of Galapagos, and committed to building a sustainable and collaborative society to achieve this objective. The Galapagos Marine Reserve was established in 1998. Created as a "Protected Area", designed to protect the waters surrounding the Galapagos Islands and the resources they contain. The waters surrounding the Galapagos are home to 3000 species of marine plants and animals. The designation of the Galapagos Marine Reserve recognizes the principles of conservation, and creates the legal basis for such special treatment. ...read more.