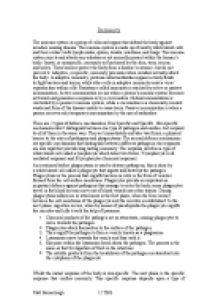 Immunity. The immune system is a group of cells and organs that defend the body against invaders causing disease

﻿Immunity The immune system is a group of cells and organs that defend the body against invaders causing disease. The immune system is made up of mostly white blood cells and their contact with lymph nodes, spleen, tonsils, intestines, and lungs. The immune system rejects and attacks any substances not normally present within the human?s body. Innate, or nonspecific, immunity is functioned by the skin, tears, mucus, and saliva. These barriers protect the body from a disease?s entrance, but do not prevent it. Adaptive, or specific, immunity processes when invaders actually attack the body. In adaptive immunity, proteins called antibodies appear in body fluids to fight bacteria and toxins, while other cells in adaptive immunity resist a virus? reproduction within cells. Resistance called immunity is reached by active or passive immunization. Active immunization occurs when a person?s immune system becomes activated and generates a response or by a vaccination. Natural immunization is controlled by a person?s immune system, while a vaccination is a chemically-created weakened form of the disease unable to cause harm. Passive immunization is when a person receives only temporary immunization by the use of antibodies. There are 2 types of defence mechanisms, Non Specific and Specific. ...read more.

There are 2 types of lymphocyte each with their own immune response. B lymphocytes are associated with humoral immunity involving antibodies that are present in body fluids; T lymphocytes are associated with cell mediated immunity. Both lymphocytes are formed from stem cells found in the bone marrow. Cell-mediated immunity is an immune response that does not involve antibodies but rather involves the activation of macrophages, natural killer cells, antigen-specific cytotoxic T-lymphocytes, and the release of various cytokines in response to an antigen. The stages in the response of T cells are as follows: 1. The phagocyte places antigens from the pathogen on its cell-surface membrane. 2. Receptors on certain T helper cells fit exactly onto these antigens. 3. This activates other T cells to divide rapidly by mitosis to form a clone. 4. The cloned T cells: a) develop into memory cells that enable a rapid response to future infections by the same pathogen. b) stimulate phagocytes to engulf pathogens by phagocytosis. c) stimulate B cells to divide. d) kill infected cells. The role of the receptors on T cells is important. The receptors on each T cell respond to a single antigen. It follows that there are a vast number of different types of T cell, each one responding to a different antigen. ...read more.

However some pathogens have over 100 different strains as the antigens that the viruses are made of are constantly changing. This is known as antigenic variability. Any subsequent infections are therefore highly likely to be caused by different varieties of the pathogen. These antigens will not correspond to the antibodies formed during previous infections. B cells respond to pathogens by producing antibodies, antibodies are proteins synthesized by B cells. When the body is invaded by non-self material, a B cell produces antibodies. These antibodies react with antigens on the surface of the non-self material by binding to them precisely, in the same way a key fits a lock. Antibodies are therefore very specific, each antigen having its own antibody. The massive variety of antibodies is possible because they are made of proteins. They are made of four polypeptide chains. The chains of one pair are called heavy chains, while the chains of the other pair are shorter and known as light chains. The binding site is different on every antibody and is therefore called the variable region. Each site consists of a sequence of amino acids that form a specific 3D shape that binds directly to a type of antigen. The rest of the antibody is the same in all antibodies so its called the constant region. This binds to receptors on cells Matt Barraclough 12 THG ...read more.