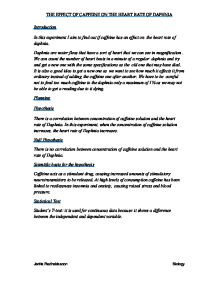 In this experiment I aim to find out if caffeine has an effect on the heart rate of daphnia.

Introduction In this experiment I aim to find out if caffeine has an effect on the heart rate of daphnia. Daphnia are water fleas that have a sort of heart that we can see in magnification. We can count the number of heart beats in a minute of a regular daphnia and try and get a new one with the same specifications as the old one that may have died. It is also a good idea to get a new one as we want to see how much it affects it from ordinary instead of adding the caffeine one after another. We have to be careful not to feed too much caffeine to the daphnia only a maximum of 1% as we may not be able to get a reading due to it dying. Planning Hypothesis There is a correlation between concentration of caffeine solution and the heart rate of Daphnia. In this experiment, when the concentration of caffeine solution increases, the heart rate of Daphnia increases. Null Hypothesis There is no correlation between concentration of caffeine solution and the heart rate of Daphnia. Scientific basis for the hypothesis Caffeine acts as a stimulant drug, causing increased amounts of stimulatory neurotransmitters to be released. ...read more.

Therefore, the Daphnia being used in the experiment ought to be treated with great care to avoid hurting or even killing them. If possible, the Daphnia should be returned back to their natural habitat after the experiment so that they can return to their normal lives. Method 1. These are the steps that we followed when doing the experiment: 2. Use fresh Daphnia for each different caffeine solution. 3. Use a pipette to transfer the daphnia to a cavity slide containing pond water of known volume. 4. Add some cotton wool to the cavity slide and place it in a way that the daphnia can't move. 5. Turn the microscope lamp on and locate the heart of the daphnia through the microscope. 6. In a pair one will use a stopwatch to count 10 seconds which is the time during which the other person will measure the heart beat by dotting the beats onto a piece of paper. 7. Measure the beat rate. 8. Repeat steps 1-6 about 2 or 3 times and get an average without caffeine then after 6 readings repeat the steps with caffeine. ...read more.

An improvement to this is to set a video camera above the eyepiece so that the heart beat of Daphnia is recorded. Later, the video can be played in slow motion with the timeline of the video displaying on the screen. This helps to obtain a more accurate heart beat rate. Since the Daphnia is not observed under its natural habitat, its stressed level in the experiment may be higher than usual. This might cause a change in its heart rate or an undesired change in the heart rate. The only thing to be done is to count the heart beat of the Daphnia as soon as it is ready to be observed. Daphnia are selected as the model in this experiment as they are fairly easy to keep and the transparent body allows easy observation of changes in heart rate under a microscope without having to dissect it. On the minus side, experimenters have to be extremely cautious when dealing with them because they are delicate and vulnerable. Generally, when the concentration of caffeine solution increases, the heart rate of Daphnia increases. Prolong exposure of Daphnia to caffeine can result in the building up of tolerance of Daphnia towards caffeine. ?? ?? ?? ?? THE EFFECT OF CAFFEINE ON THE HEART RATE OF DAPHNIA Jenita Radhakissoon Biology ...read more.