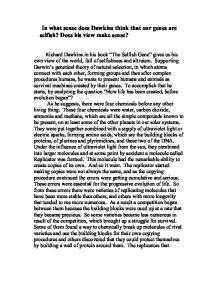 In what sense does Dawkins think that our genes are selfish? Does his view make sense?

In what sense does Dawkins think that our genes are selfish? Does his view make sense? Richard Dawkins in his book "The Selfish Gene" gives us his own view of the world, full of selfishness and altruism. Supporting Darwin's genetical theory of natural selection, in which atoms connect with each other, forming groups and then after complex procedures humans, he wants to present humans and animals as survival machines created by their genes. To accomplish that he starts, by analyzing the question "How life has been created, before evolution began"? As he suggests, there were four chemicals before any other living thing. Those four chemicals were water, carbon dioxide, ammonia and methane, which are all the simple compounds known to be present, on at least some of the other planets in our solar systems. They were put together combined with a supply of ultraviolet light or electric sparks, forming amino acids, which are the building blocks of proteins, of plurines and plyrimidines, and these two of the DNA. Under the influence of ultraviolet light from the sun, they combined into larger molecules and at some point by accident a molecule called Replicator was formed. ...read more.

It is then when the writer presents the human body as a gigantic working unit for a colony of genes. To let the reader understand this in a simple way, Dawkins is referring to the brain and the nervous system of the human body. By recalling the example of the Andromedians, he wanted to describe what the distances between the genes in our body are, and how they communicate, so as to control the balance and the safety of the body. Brain is the control room and nerves are millions of cables connecting the main computer to the muscles with the motor nerves so as to have movement, and to the eyes and organs with the sensory nerves. Genes found the quickest way to download information from the brain to the rest of the body, and this is the speed of light and sound. The eyes capture visual icons, which are transferred to the main computer the brain with the speed of light, and ears use the speed of sound to send information. From all this procedures that are presented by Dawkins, the reader can understand the main aspect of his book, which is that genes are selfish. ...read more.

As the programmer will program the computer with the dangers and the bad movements that might cost a king or a Queen, the same do genes with their survival machines. They set their computer up beforehand in the best way possible, with a proper balance between lists of specific knowledge and hints about strategies and techniques. After this programming, which is not directly but indirectly, the survival machine is on its own and the genes can only sit passively inside. Genes again for their own safety make this programming. He presents genes as immortal. They accomplished to survive through millions of years and do not think they are likely to die. They copy themselves traveling from one body to another abandoning a succession of mortal bodies before they sink in senility and death. We are their survival machines and they are our replicators. With all his arguments he gave the conclusion that genes are selfish. So Dawkins with all his presentations he tries to pass to the readers another prospective of their existence, which he accomplishes really well. His view makes absolute sense, Explained in plain words supporting it in the best way for everyone to be convinced. ...read more.